Say ‘NO’ To Palm Oil

9:46 AM
shanka
Did you know that most of us are fueling one of the world’s biggest ecological disasters and acts of primate genocide in history?

Borneo and Sumatra are two of the most bio-diverse regions of the world, yet they have the longest list of endangered species. This list includes the magnificent orangutan. These two South-East Asian islands are extremely rich in life, containing around 20,000 flowering plant species, 3,000 tree species, 300,000 animal species and thousands more being discovered each year. Despite this amazing biodiversity and delicate web of species, an area the size of 300 football fields of rainforest is cleared each hour in Indonesia and Malaysia to make way for the production of one vegetable oil. That’s 6 football fields destroyed each minute. This vegetable oil is called palm oil, and is found in hundreds of everyday products, from baked goods and confectionery to cosmetics and cleaning agents… many of which you buy in your weekly shopping.

Due to the massive international demand for palm oil, palm oil plantations are rapidly replacing the rainforest habitat of the critically endangered orangutan; with over 90% of their habitat already destroyed in the last 20 years. 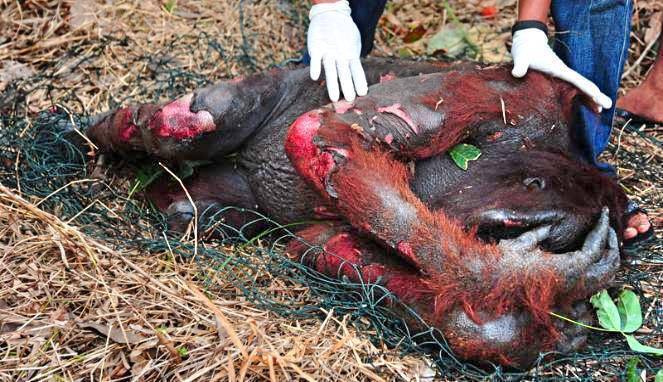 Orangutans are some of our closest relatives, sharing approximately 97% of their DNA with humans. Orangutan means ‘Person of the jungle’ in the Indonesian language. It is estimated that 6 to 12 of these ‘jungle people’ are killed each day for palm oil. These gentle creatures are either killed in the deforestation process, when they wander into a palm oil plantation looking for food, or in the illegal pet trade after they’ve been captured and kept as pets in extremely poor conditions and provided with extremely poor nutrition.

Orangutans are considered as pests by the palm oil industry. In the deforestation process, workers are told that if wildlife gets in the way, they are to do whatever is necessary in order to dispose of them, no matter how inhumane. Often orangutans are run over by logging machinery, beat to death, buried alive or set on fire… all in the name of palm oil.

Government data has shown that over 50,000 orangutans have already died as a result of deforestation due to palm oil in the last two decades. Experts say that if this pattern of destruction and exploitation continues, these intelligent acrobats of the jungle will be extinct in the wild within 3 to 12 years (as early as 2015). It is also thought that their jungle habitat will be completely gone within 20 years (approximately 2033).

Around 50 million tons of palm oil is produced annually; with almost all of that being non-sustainable palm oil, that replaces 12 million hectares of dense, bio-diverse rainforest. That’s the equivalent landmass of North Korea deforested each year for palm oil alone!


Palm oil is also having a shocking impact on our planet. The production of this one vegetable oil is not only responsible for polluting rivers and causing land erosion, but when the plantation workers set fire to the remaining trees, shrubs, and debris to make way for the oil palms, it produces an immense amount of smoke pollution that is toxic to planet earth. This has been found to be the second biggest contributor to greenhouse gas in the world.

By purchasing products that contain crude palm oil, you are helping destroy the ancient, pristine rainforest, wipe out species like the orangutan, and create a large-scale ecological disaster. Think of the consequences next time you do your weekly shopping; the consequences not only for orangutans and other animals but for us as the human race; for we cannot survive without the rainforests either. We have a choice, orangutans do not.