Home » »Unlabelled » Colgate Total Toothpaste Has Triclosan, A Cancer-Linked Ingredient — And Nobody Knew Until Now

Colgate Total Toothpaste Has Triclosan, A Cancer-Linked Ingredient — And Nobody Knew Until Now

1:58 AM
shanka
Millions of Americans are putting it in their mouths every day, by way of a top-selling toothpaste that uses the antibacterial chemical to head off gum disease — Colgate’s Total, Bloomberg noted.

Total is safe, Colgate says, citing the rigorous FDA process that led to the toothpaste’s 1997 approval as an over-the-counter drug.

A closer look at that application process, however, reveals that some of the scientific findings Colgate put forward to establish triclosan’s safety in toothpaste weren’t black and white — and weren’t, until this year, available to the public, Bloomberg said.

The toothpaste uses triclosan to help prevent gum disease, but controversy over the antibacterial chemical has many consumer companies phasing it out and regulators reviewing if it’s safe to put in soap.

The Bloomberg report noted that Minnesota voted in May 2014 to ban the chemical in many products.

Colgate Total was approved by the Food and Drug Administration in 1997 as an over-the-counter drug, but some of the scientific findings in the application report were withheld from the public until recently.

The best part about this? The FDA didn’t released the 35-page toxicology summary of Colgate Total and triclosan until early 2014, following a Freedom of Information Act lawsuit filed in 2013. After some pressing from Bloomberg News, the FDA also published the findings on its website.

“In the nearly 18 years that Colgate Total has been on the market in the U.S., there has been no signal of a safety issue from adverse-event reports,” Colgate spokesman Thomas DiPiazza told Bloomberg. .

The 35-page report provides a fascinating look beyond the Colgate Total label. In it, you’ll find that the FDA was wary about certain Colgate claims, not only regarding the potential hazards of triclosan, but also that it can treat gingivitis — which the FDA points out isn’t self-diagnosable — and eradicate plaque. 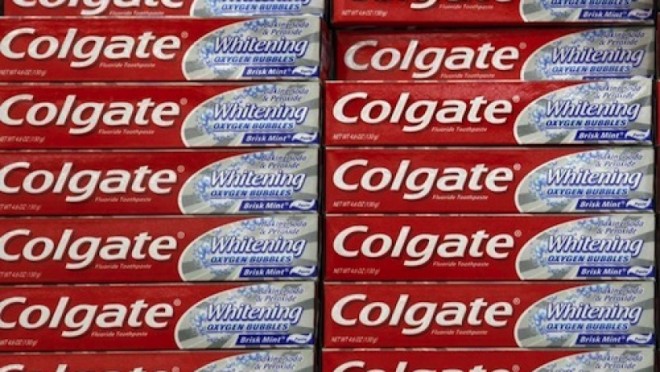 But as Bloomberg News points out, one of the biggest reveals is the fact that Colgate dismissed the triclosan experiments done on animals, calling them unnecessary:

Among the pages were studies showing fetal bone malformations in mice and rats. Colgate said the findings weren’t relevant. Viewed through the prism of today’s science, such malformations look more like a signal that triclosan is disrupting the endocrine system and throwing off hormonal functioning, according to the three scientists.

Included in Colgate’s FDA application along with these experiment on animals was a study the company did on children and adults in the 1990s to prove triclosan was safe to human exposure in small, or proper, doses:

The applicant has adequately assessed the absorption of triclosan from an exaggerated dosing scheme. The resulting exposure level is well above that recommended by the FDA carcinogenicity advisory committee.

So, should we be worried? Well, the FDA says on its website that triclosan is “not known” to be dangerous to humans, but emphasis on the “not known” part. Although testing in animals doesn’t always lead to the same effects in humans, these previous animal experiments have prompted the FDA to open up further research on triclosan. However, both the FDA and EPA stress that triclosan products such as soaps and toothpastes are currently safe to use.

From the EPA, which conducted its own triclosan assessment in 2008:

The Agency determined that, with the exception of preservative use of triclosan in paints and stains, pesticides containing triclosan met the statutory safety standard in FIFRA, provided that risk mitigation measures as outlined in the RED were implemented, confirmatory data gaps were addressed, and label amendments were incorporated as presented in the RED document. Subsequent to the issuance of the RED, the registrant of triclosan products for use in paints and stains voluntarily requested cancellation of the registration of products for these uses.

However, scientists say that it’s not uncommon — or wrong — to second guess these common chemicals, especially since we’re exposed to thousands of chemicals every day. “We have created a system where we are testing these chemicals out on the human population. I love the idea they are all safe,” UMass Amherst Professor Thomas Zoeller told Bloomberg News. “But when we have studies on animals that suggest otherwise, I think we’re taking a huge risk.”