People have compared this to the Muslim Haj in Mecca, when devout pilgrims circle the Kaaba in the center. But ants aren’t Muslims, so why are they doing this? 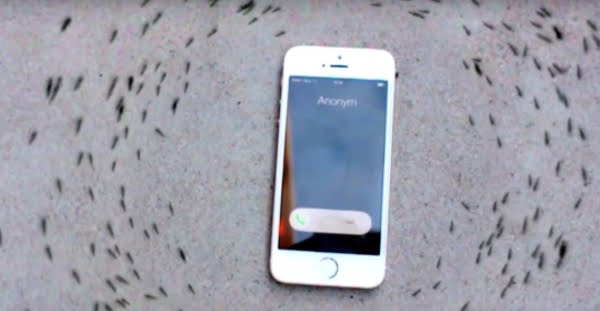 One hypothesis as to why ants swarm around phones is that ants can detect the Earth’s magnetic field and their navigation gets completely obliterated by the ringing phone.Another hypothesis is that the vibrations and the ringing of the phone excite them. Seems reasonable enough.

The troubling fact  is that even experts don’t know for sure why the ants do this, even though this circling behavior is seen often seen in ant colonies. Usually they do it when they lose the scent of the pheromone that keeps them connected to the other ants. When they lose the scent they begin to follow each other in a circle until they die of exhaustion. Sad, but it begs the question: Can a phone interrupt the scent of pheromones?

Australian entomologist Nigel Andrew from the University of New England has a theory:

“Perhaps when the phone starts to ring, the radio waves it operates on messes with their sense of direction. A lot of ants use magnetism to orientate themselves. [They] have magnetic receptors in their antennae. If they’re traveling long distances they use magnetic cues from Earth to know if they are going north, east, south or west.”

“There are many ants that actually start forming in a circle without the phone. It’s an unavoidable consequence of their communication systems. Having the ants together like that, the shape of the phone may have something to do with it and the vibration might get them a bit more excited, but a lot of ants will do it even without the phone.”

Apparently, no one knows for sure and can only guess. What do you think is happening when this phone rings that causes this crazy ant parade?
Source : First To Know
at 9:23 PM
Email ThisBlogThis!Share to TwitterShare to Facebook
Newer Post Older Post