9:53 PM
shanka
When an Empath comes across fake people it is common for them to shut down as a form of protection.  This can be seen as stumbling over words or one’s memory and thought process being affected. Anyone who is not emanating truthful vibes will put an Empath on high alert. ​In my days as a hairdresser, I could never understand why when I was with certain clients, who came across lovely, I would get awful feelings inside. It was only when I discovered I was an Empath that it all made sense to me. I was feeling their pain that they were hiding in fake behavior.

There are many levels of falseness and many reasons for it. In the early days of discovering of one’s Empathic abilities it may not always be easy to pinpoint just why someone feels so bad to you. 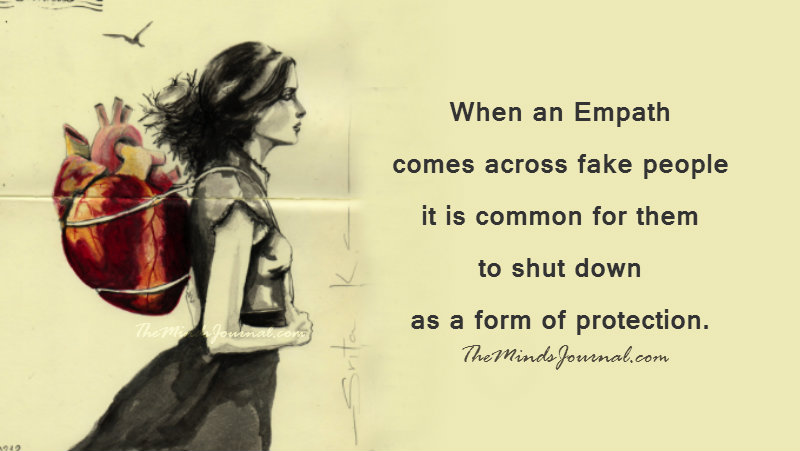 Here are some traits and behaviors that may leave you feeling awful:

And this is how you may find yourself reacting:


Now just because an Empath feels fakeness and untruths in another does not mean they do not fake themselves. For some, when they feel bad around a faker it may mean they are picking up a trait they do not like about themselves and they too hide it from the world.

We all have to put a face on and act fake at some point in our lives, but for some it’s everyday. We may have to be upbeat and happy when we feel sad or depressed, we may have to act annoyed when we are actually indifferent or we may have to pretend to love a job we actually detest. In some cases faking it can get us through difficult situations, but living it daily is not healthy.

It is important for the Empath to uncover any hidden traits and emotions, because whilst we bury a side of us we do not like we will never be happy or feel complete. However, the problem we have is that many of us do not know the root cause.

One of the biggest causes of unhappiness on this planet is people not knowing themselves and when we hide a side of us from others without knowing the reason, it will cause us pain. Being true and authentic is emotionally freeing. Quite often, many of the traits we buried have in fact been inherited and passed down the family line or they may even be from a past life. Wherever they stemmed from it is important for us to uncover these traits, and if they can’t be changed (some traits are hardwired), accept and learn to live with them.

Sensitive people will bury negative traits because we know how destructive they are but burying them does not lose them. They will always show up and cause damage.

Hate, anger, jealousy and fear of rejection are four traits most often buried. We may hate someone for the way they have behaved towards us. Anger may have been inherited from an angry parent. Praise and attention being bestowed on a childhood friend or sibling may have led to a jealous streak and being rejected as a child, by an unknowing parent for instance, may have built up inside as an intense fear of rejection. All very simple and innocent triggers, but all of which can snowball and lead us to have deep set insecurities that we feel have to remain hidden. When we recognize and accept a trait in self, it loses its hold.


This article was originally published in Awakening People
Loading...
at 9:53 PM

Why Should You Look Out For Domestic Tobacco Prodcuts?

When you search the internet or go out to a store to buy tobacco products, you will see a lot of different varieties that belong to various ...