Home » »Unlabelled » Her Tattoo Says ‘I’m Fine’ But Look At It From Another Angle…The Message Is Shocking !

Her Tattoo Says ‘I’m Fine’ But Look At It From Another Angle…The Message Is Shocking !

9:46 PM
shanka
1
Getting a tattoo is a big decision. It will stay with you for the rest of your life and will be one of your defining characteristics. People with tattoos often get judged harshly and unfairly for what appears on their skin, so if you are going to get one, you better make sure it is something that means a lot to you. Personally, I have never gotten a tattoo but I have a lot of respect for people that do. If I had a great idea for one I would do it, but I’m still waiting for inspiration to strike. 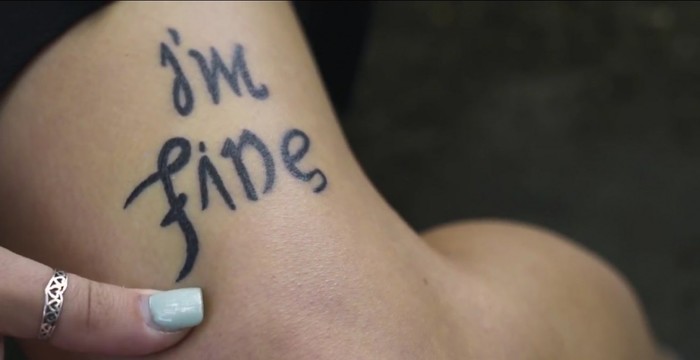 Bekah Miles had a great idea for a powerful message she wanted to send through a tattoo. She suffered through depression and it left a severe impact on her life. Whenever someone would ask her how she was doing, Bekah would respond, “I’m fine.” But many of those people who asked had no idea of the hardships she was going through. Bekah knew many people were living with the same problems, so she came up with an idea that would raise awareness for the issue.

Her tattoo sits on her side and reads “I’m fine.” That’s how everyone who faces her sees it. To Bekah, the tattoo looks very different. When looking down, the tattoo reads “Save me.” This is meant to symbolize the double life that many of those living with depression experience. Her message is being spread across the world and has been embraced by many. Bekah’s bravery to speak up for this issue will not be forgotten.