Home » »Unlabelled » The Most Generous Bride on Earth: Couple Feeds 4,000 Syrian Refugees on Their Wedding Day

The Most Generous Bride on Earth: Couple Feeds 4,000 Syrian Refugees on Their Wedding Day

8:49 AM
shanka
This luminous Turkish newlywed spent her wedding day running a bread line for thousands of starving Syrian refugees.

A couple in Turkey swapped out lavish nuptials with their friends and family for the bread line with thousands of Syrian refugees.

Last Thursday, Fethullah Üzümcüoğlu and Esra Polat doled out food to 4,000 Syrian refugees for their wedding reception on the border town of Kilis. The bride wore an elaborate white dress, with a tiara perched on her headdress, and the groom sported a white tuxedo with black trim. They stood behind large food trucks distributing meals to hungry Syrians. The couple had decided that instead of hosting their friends and family for a traditional banquet reception, they would feed the victims of a bloody civil war next door. 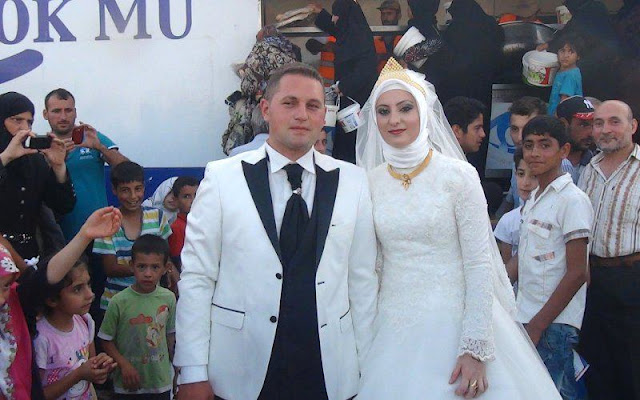 The idea came from the groom’s father, who volunteers for a Turkish relief organization called Kimse Yok Mu (KYM). For the past few years, KYM has distributed daily meals to the thousands of impoverished Syrians who’ve flooded across the nearby border. He approached a representative of the organization and proposed that the family would cover part of the costs of feeding refugees for the day (the family did not want to reveal the exact cost).

“I thought that sharing a big delicious dinner with our family and friends was unnecessary, knowing that there are so many people in need living next door,” he told the Independent blog i100. 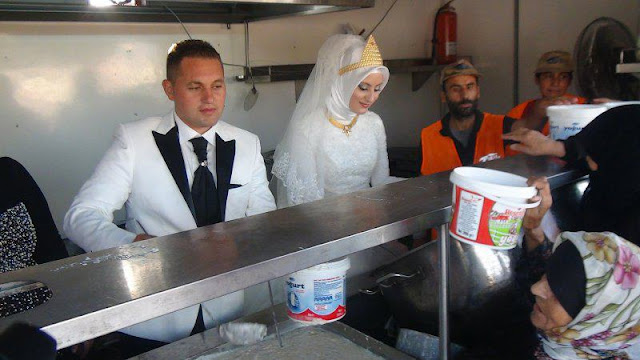 Then he told his son, who was surprised by the prospect, but soon won over.

“When he told that to the bride she was really shocked because, you can imagine, as a bride you wouldn’t think about this—it’s all about you and your groom,” says Hatice Avci, the international communications manager for KYM. “In southeastern Turkey there is a real culture of sharing with people in need …They love to share their food, their table, everything they have. That’s why the bride also accepted. And afterwards she was quite amazed about it.”

So, they arrived at KYM’s distribution center on Thursday to spend the day serving food and taking photographs with their grateful recipients. “Hopefully this will also give the start for other wedding dinners to be held here with our brothers in Syria,” the groom told local news.

Kilis has been a central crossing point for the flood of Syrians arriving in Turkey. The city’s official population is 108,000, but it hosts 123,000 Syrians. Early on, it was set up with a camp with containers for temporary shelter, but many refugees live in the urban areas where access to humanitarian assistance can be unreliable. The number of Syrians now living in Turkey is nearing 2 million, and in July, the government announced it would build a new refugee camp in Kilis to handle the influx.

On Tuesday evening, the newly married couple were still pleased with their decision to forsake a personal celebration for one with a greater good. “It’s like sharing a dinner with your friends and family who have this kind of thing on a daily basis—or sharing something with people who don’t even have the most basic things,” Avci says. She had just gotten off the phone with the couple before speaking to The Daily Beast. “He told me that the best moment of his wedding was when they had the food distribution.”