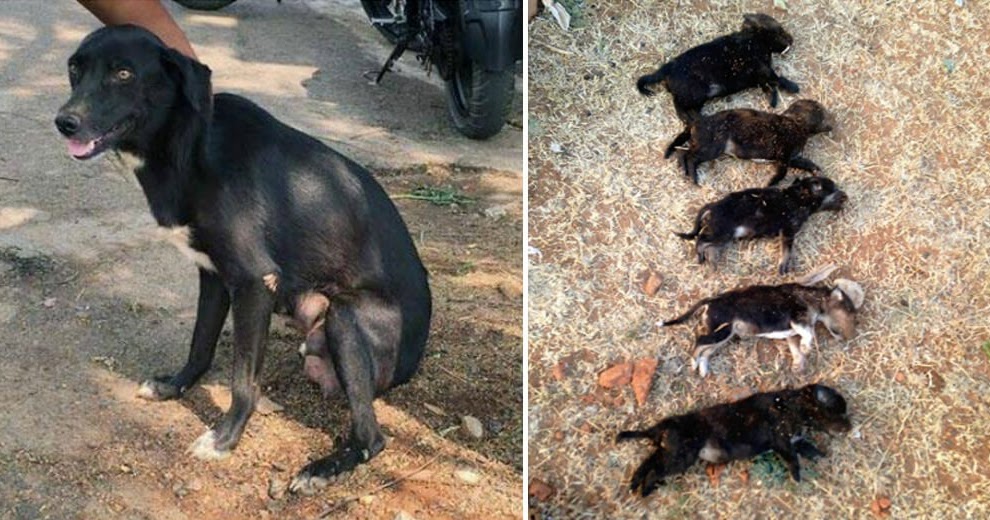 Stray dogs can end up having a lot of puppies, and these dogs then continue to have more litters of their own, because they’re not being spayed and neutered. This can cause havoc to people who aren’t fond of animals and don’t want them around their property.

But on Lane No. 3, Krishnanagar in India, the people have always shown a fondness for animals, so much so that a woman even opened a local coffee shop that allows admittance to dogs so that they don’t have to be out in the cold at night.

A four-year-old dog named Ammu had just given birth to a litter of puppies in a drain near a woman’s house. The woman, named Ponnamma, was outraged by this for some reason, and threw Ammu’s puppies into the empty lot across from her house.

The impact of her actions was so great that some of their intestines were external. Throughout all of this, Ammu could be heard crying and wailing in protest, and circled the bodies of her dead puppies, trying to wake them up. The other people who lived on the street confronted Ponnamma and asked why she did this, and without any remorse, stated that she didn’t like the dog giving birth so close to her house.

Five days later, Ammu still lingers around the area where her puppies are buried, hoping that someone will come and help her. She’s even dug them out and tried to nurse them, hoping that that will bring them back to life.

Ponnamma was arrested and then released on bail, but the CCTV footage is clear of her actions, and hopefully she’ll be charged with the fullest extent of the law. Share away, people.
Credits: HeroViral
at 12:08 AM