10:33 PM
shanka
An old soul is essentially someone who is young, but prefers to be around older people, and has a more mature outlook on life than most people their age.  Old souls tend to spend a lot of their time alone, and a lot of people seem to misunderstand them.  Contrary to what people think, old souls aren’t lonely, they are just comfortable with themselves and enjoy their own company.  When it comes to love and being in relationships, they also express their love differently, and here, we show you how. 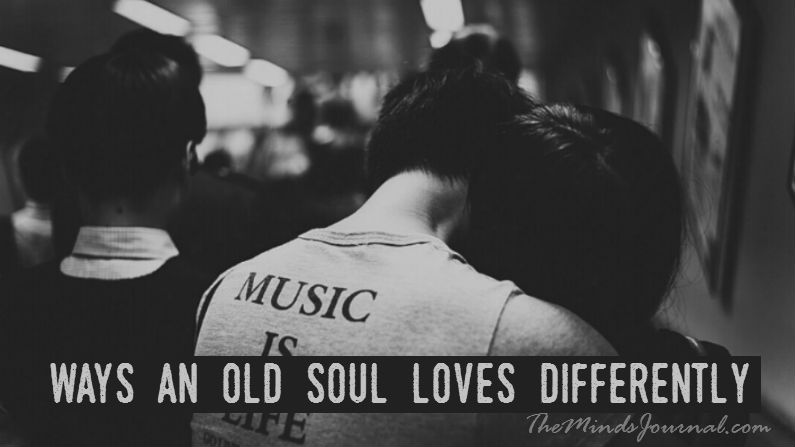 1. Homebody. Old souls are homebodies, which means they are always looking for the person that will be willing to stay in with them on a Friday night, perhaps reading poetry over candle light with a bottle of wine.

2. Materialists. Old souls aren’t impressed by materialistic things, so if you’re hoping for that new set of diamond earrings, keep wishing. An old soul will likely choose to write you a love letter over buying you jewelry.

3. Communication. Old souls are great communicators, and will tell you what they are feeling. They don’t play games, especially when it comes to relationships. Don’t be taken aback by their honesty however, because they do mean well at the end of the day.

4. Emotions. Old souls aren’t capable of having one night stands because they get emotionally invested in whoever they are dating. They feel things on a deeper level than most people do, and don’t open up to just anyone.

5. Settling. Old souls think about life in the grand scheme of things. For example, an old soul won’t settle down with you unless they think there is some future potential in the relationship. They don’t do things for no reason.

6. Shy. Most old souls have a hard time fitting in with other people because they don’t seem to have a lot in common with others. An old soul might seem standoffish at first, but they’re really just shy. So don’t assume that because they aren’t saying much, they don’t like you.

7. Understanding. They value your opinion, and are good listeners. They are very understanding, and are good at seeing things from different perspectives. So if you find yourself in an argument with an old soul, they will try to come up with a solution for your problem rather than argue with you about it for hours on end.

9. Relaxing. Old souls might have a hard time loosening up, so it might take some prying to get them to relax. They have a tendency to take things too seriously at times, so try to have some patience with them when they seem on edge.

10. Sensitive. Old souls are extremely sensitive, so watch what you say around them. While they will always be honest with you about their feelings, they also expect the same from you, and if they find out you aren’t being completely honest with them, they might feel betrayed.

11. Creative. Old souls are creative and will put a lot of thought into a date night with you. Rather than your usual dinner and a movie, an old soul will make sure you have a memorable date night experience with them and will take things to the next level.

12. Intuition. Old souls are really in tune with their intuitions, and can tell right away when something is wrong. Don’t try to hide your real feelings from them, because there is no use in doing so.

13. Realists. They can come off as pessimistic at times, but in fact, they are just realists. They are constantly feeling disappointed by humanity, so sometimes they need their partner to help remind them that things aren’t always so bad.

14. Independence. While old souls love spending time at home with their significant others, they also value their alone time, so don’t feel offended if your partner requests some time apart.

15. Worth it. At the end of the day, dating old souls can come with some difficulties, but it’s worth it because they will be extremely loving, loyal, and understanding of your needs.

Are you an old soul ? Share With Your Friends !