10:10 PM
shanka
His name is Tony and he is only 5 years old. His story is unfortunate and cruel but that is now definitely changing course. Thanks to the strength of this child, who learned to walk on prostheses, it was possible to collect £ 1 million to donate to the Lambeth Children's Hospital (London). 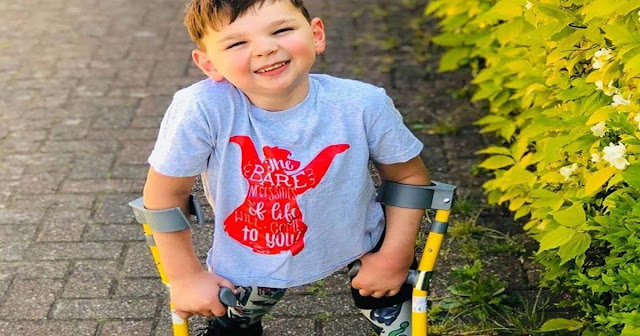 He succeeded in a feat where even many adults would have failed: to raise £ 1 million after completing a charity walk on his new prosthetic legs.
But let's start from the beginning: Tony Hudgell, five years old, lost both legs after being physically abused by his biological parents (currently in prison) when he was only 41 days old. The injuries led to sepsis and multiple organ failure and his condition was so severe that both limbs had to be amputated at knee height.
The brave boy, who has since been adopted by loving parents, Paula and Mark, used the lockdown period to learn to walk on his new prosthetic limbs.

Inspired by the recent efforts of Captain Tom Moore (from whom Mickey Nelson who celebrated his 100th birthday by walking and raising funds), Tony began to transform his personal challenge into a charity collection.
The little boy started collecting 500 pounds by walking 10 km in 30 days.

Here's a message from Mr Kokkinakis, who wanted to share how proud he is of Tony's hard work fundraising while learning to walk on prosthetics.

But the child then went on to achieve, through fundraising on the Just Giving website, an incredible goal: the collection (to date) of £ 1,241,906 to be donated to the Evelina London Children's Hospital in Lambeth (Borgo di Londra), the hospital that saved his life.

To celebrate his valuable work, Tony was honoured with the Point of Light award which is given to "exceptional individual volunteers" for making a difference within their communities.
Tom Tugendhat who physically awarded the prize to the little boy said:
“Tony Hudgell is an inspiration for everyone. He captured the hearts of the nation and his challenge allowed him to share how special it is with everyone "
Paula, Tony's foster mom added:
"This shows that even after an unfortunate start to life, with the right love and support, a huge amount of determination and a positive attitude, you can succeed and really make a difference."
Source: BBC / Kent Online / justgiving.com
at 10:10 PM
Email ThisBlogThis!Share to TwitterShare to Facebook
Labels: News
Newer Post Older Post