12:33 AM
shanka
Summer is also time for cobs! Surely you have noticed that these have characteristic filaments, the so-called "corn beard". But perhaps you have never thought that this part of the cob can also be used as a fun summer pastime for children. In fact, it looks a lot like hair to be combed to create real hairstyles! 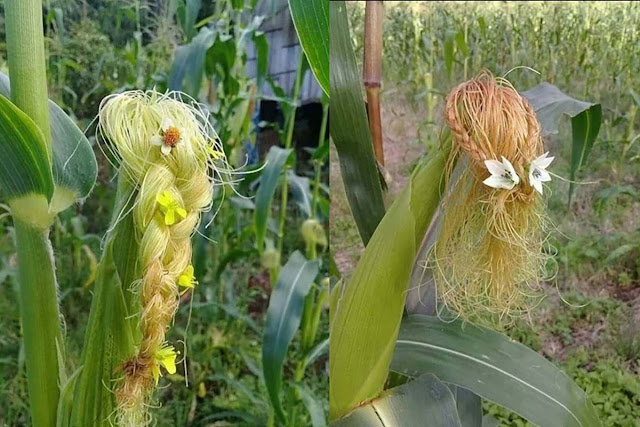 The term " beard of corn " (or even corn hair) refers to those white, yellowish and in some cases almost brown or reddish filaments (it depends on the variety of the corn since there are also multicolour ones) that come out of the cob. It is actually the stems of the female flowers of the plant which are then eliminated when consumed.

We suggest you today fun and original system to use them, before throwing them away and consuming the cob: transforming them into hair to play with and to style. But do it as soon as possible, better if directly in the field with the cobs still attached to the plant. The hair of the corn in fact, once collected, will wither quickly.

For those who have a vegetable garden, it will not be difficult to get this natural game, all the others will instead be able to go in search of a grower to ask to have the cobs still with all their hair attached, if possible.

The idea was re-launched by the Facebook group Erbacce e Dintorni.

In fact, these original hairstyles have long been shared on social networks, especially by people who live in countries where cobs are in daily use and where they become a sort of "dolls" at zero cost, especially for the poorest children who they have no toys available.

With the hair of the cobs, you can create many hairstyles, using also other natural elements (flowers, sticks, leaves, etc.) as accessories.

A game that, at least in our country, has a bit of an ancient flavour, but which is actually still perfect for children to rediscover the many potential that nature offers, even in terms of fun.