Home » News » Clouds Of 5 Colors Appear In The Skies Of Vietnam, Japan and China
News

Clouds Of 5 Colors Appear In The Skies Of Vietnam, Japan and China

12:03 AM
shanka
Rainbow clouds. A spectacular and very rare phenomenon has been observed in recent days by various Asian countries, from Vietnam to Japan.

An event as beautiful as it is unusual, which almost seems to want us to wish good luck. And these days we really need it….

Impossible not to notice. It was enough to raise the eyes to the sky to notice some strange clouds. And their colour, unlike what normally happens, was neither white nor gray: in fact, they showed some of the colours of the rainbow.

On the afternoon of June 20, a Vietnamese social network was suddenly flooded with images posted by users from various cities, who portrayed these fascinating coloured clouds.

On the same day, they appeared in various provinces of Vietnam such as Hanoi, Nghe An, Son Tay. 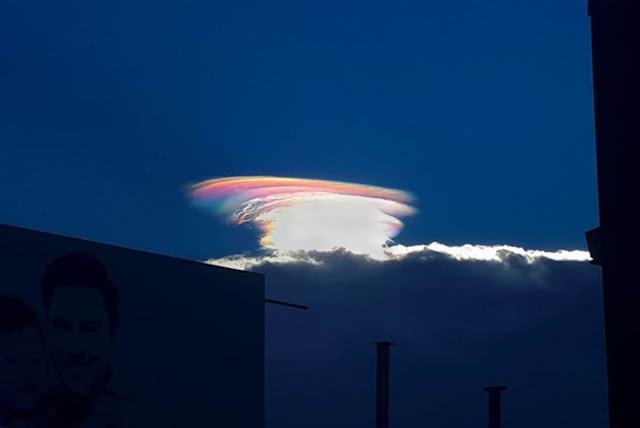 A week later, in the skies of Tokyo, the Japanese were lucky enough to admire a similar show.

The bands of bright clouds, colourful and even more visible than those of Vietnam, have been immortalized and spread on social media.

But it's not over. After Japan, it fell to China. On June 28 in Haikou, very rare clouds of 5 colours appeared.

It was surprising that in just under two weeks, the usually quite rare phenomenon appeared in various Asian countries, sending residents into raptures.

According to many, this is an auspicious sign, but another popular tradition this phenomenon seems to indicate that the weather forecast of the year will be extremely difficult.

What is it actually?

Beyond popular belief, the phenomenon is well known. In fact, these are the so-called iridescent clouds, which are formed when they appear and near the sun or moon.

It is an optical phenomenon that is generated when small drops of water or ice crystals are crossed by the sun's rays from different angles. The Weather Center of Emilia Romagna explains that these clouds

"Derive their name from the physical phenomenon of iridescence: just as the iris of the human eye is trained to distinguish a wide range of colours of visible light, so the sky is often able to offer us the vision of real rainbows at the inside the clouds. The rays of the sun, perceived by us as white-yellow light, meet between 7000 meters and 10000 meters in height a layer of veiling, a category of rather thin clouds formed by millions of ice crystals ".

They are more often observed in Altocumuli, lenticular in cirrocumuli and cirrus clouds. Sometimes they appear as parallel bands on the edges of the clouds.

They are usually characterized by pastel colours but can also have bright shades mixed together. When they appear close to the Sun, the effect can be difficult to spot as it is mixed with the glare of the light.