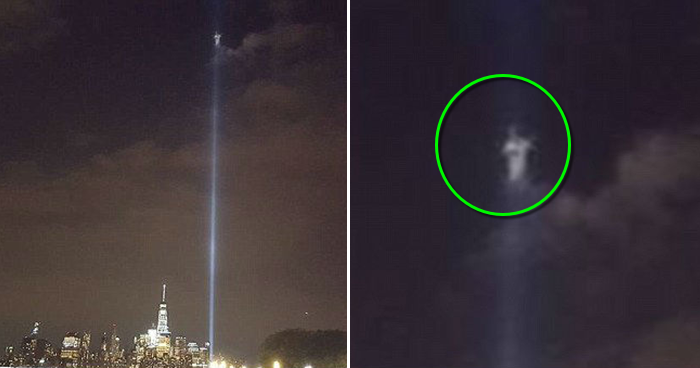 Lots of people believe in guardian angels, and many more take comfort in the idea that some force larger than ourselves keeps watch over us. Such belief relies on a leap of faith, but every now and again something comes along that makes that leap much easier.

This past September 11, photographer Rich McCormack snapped some photos of the World Trade Center’s annual “Tribute in Light.” But when he took a second look at one of the pictures, he noticed something miraculous…

Jersey City’s Rich McCormack recently snapped some photos of the World Trade Center’s 9/11 memorial, the ‘Tribute in Light.” When he looked back at his pictures, he noticed something odd in one of them.

In the beam of light there appeared to be a ghostly apparition looking down over the city. He shared the photo on social media, where many viewers pointed out the figure’s resemblance to an angel or even to Jesus Christ.

Some have accused McCormack of doctoring the photo, but most people take it as a source of comfort. Many have said it reaffirmed their faith and made them feel like “God is watching over us always.” While there’s no way to prove anything for sure, the photo is certainly very powerful!

Whether you believe in guardian angels or not, you have to admit that the “figure” in the photograph appearing on the anniversary of 9/11 is a compelling coincidence.
Share this incredible picture with your friends below!