Home » »Unlabelled » Science Examined People Who Claim Not To Eat Or Drink. What They Found Is Mind-Boggling!

Science Examined People Who Claim Not To Eat Or Drink. What They Found Is Mind-Boggling!

10:17 PM
shanka
Breathariansim refers to the practice of sustaining oneself without the need for food. This concept is not new; in fact, for thousands of years, various cultures around the world have written of this ability. In the third book of the Yoga Sutras, for example, approximately twenty-five siddhis are listed as having extraordinary abilities. This is a common theme throughout Buddhism, and various other spiritual traditions as well. Clairvoyance, psychokinesis, and many more are all special traits attributed to the siddhis, as is the liberation from hunger and thirst.
Though modern day science has seen evidence of extended human capacities like telepathy, remote viewing, and pre-cognition, very little work has gone into examining breatharianism. Some brilliant minds do believe it’s possible, however, including Nikola Tesla. In 1901, he made the following argument:
My idea is that the development of life must lead to forms of existence that will be possible without nourishment and which will not be shackled by consequent limitations. Why should a living being not be able to obtain all the energy it needs for the performance of its life functions from the environment, instead of through consumption of food, and transforming, by a complicated process, the energy of chemical combinations into life-sustaining energy?(source)

Liberation from food and hunger does indeed sound unrealistic and, from what we know of modern day biology, impossible. But the history of science has shown us many times that the impossible can become the possible in an instant. A great example of this is the recent discovery that humans can actually influence their autonomic immune system using the power of the mind.
Let’s take a look at what happened when people who claimed that they don’t eat were examined by science. 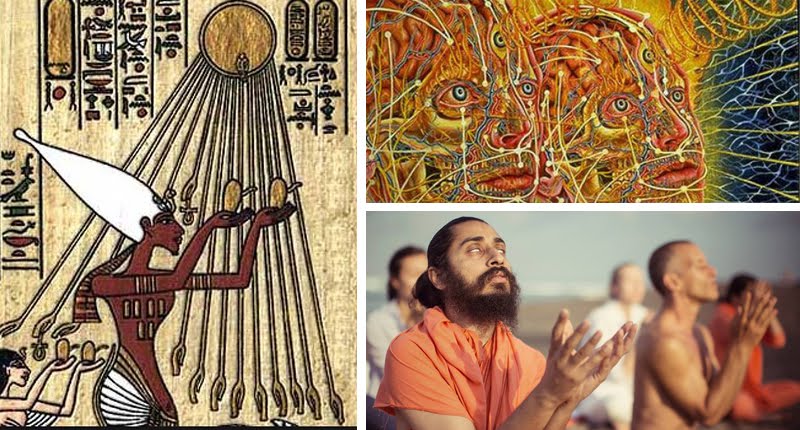 The Qigong practice of Bigu, and Qigong practices (which include the liberation from food) examined by science have yielded some extraordinary results. A study published in the American Journal of Chinese Medicine, as seen in the the US National Library of Medicine, demonstrated that a woman with special abilities was and is able to accelerate the germination of specific seeds for the purposes of developing a more robust seed stock. This is one example of many;
The Catholic Charism of India also involves the claim of living well without eating food. Dean Radin, Chief Scientist at the Institute of Noetic Sciences, explains the concept in his book Supernormal: Science, Yoga, and the Evidence for Extraordinary Psychic Abilities:

The implication is that the human body can transmute ambient energy into nutrients, and through the practice of cultivating this ability one can live comfortably for as long as one wishes without food, and possibly without drinking water. This is described as a siddhi in the Yoga Sutras as Pada 111.30: liberation from hunger and thirst.

This flies in the face of a substantial body of medical knowledge, which has established that the human body can last about five days without water, and a few weeks at most without food. Beyond that, you’re dead. As a result, despite a host of historical examples of people lasting for years without eating, and sometimes without drinking, most nutritionists and biochemists regard such claims to be ridiculously impossible, and the people who make the claims—currently dozens to hundreds worldwide—to be seriously delusional. Some of those claimants may well be delusional. But all of them?

Prahlad Jani is a local of Ahmedabad, India, who claims that at the age of 11, the Hindu goddess Amba appeared to him and told him that he would no longer have to eat food. He has apparently lived in a cave since the 1970s, and claims not to have eaten anything for most of his 81 years (as of 2012).
Jani was tested in 2003 and in 2010 at Ahmedabad’s Sterling Hospital by Dr. Sudhir Shah and his large team of doctors. Dr. Shah is a consultant neurologist who has been practicing for 20 years, as well as a professor and department head of neurology at KM School of PG Medicine and Research.
During the first test, which took place in 2003, Jani was monitored 24/7 by hospital staff and video cameras, where it was confirmed that Jani neither ate nor drank. He also did not show any physiological changes which, according to modern day medicine, should be impossible. This test took place over a 10 day period. Although it might not seem like a significant amount of time, to go 10 days without food and water and not experience any physiological changes is actually quite astounding.
He was tested again at Sterling Hospital in 2010 from April 22nd to May 6th. This time, he was observed by thirty-five researchers from the Indian Defence Institute of Physiology and Allied Sciences, among other organizations. This time, Jani was observed to not eat or drink for two weeks. As with the previous test, he exhibited no deleterious effects from this abstention.
This truly is unbelievable, and goes against everything we know about both human physiology and the nutritional requirements of the body.
As one might expect, neither these tests nor their results were published in medical journals. The studies have also generated a lot of criticism. The main arguments against these tests were, however, quite weak in my opinion. One argument holds that Jani escaped the scrutiny of the hospital staff and video cameras with the assistance of his disciples, and that he did in fact eat/drink something. Yet hospital staff maintains this is impossible because he was monitored around the clock, as per the requirements of the study.
Even with these criticisms, the evidence is solid and appears to correspond with a known siddhi.
A statement from a scientific group (which included the Defence Institute of Physiology and Allied Sciences) given to ABC News back in 2012 reads as follows:

We realized that, if this whole phenomenon really exists in a human being even for 15 days, it would have immense application in unraveling secrets of medical science and its application for human welfare.
Instead of ignoring this case, we selected to investigate further, in a rational and scientific way. We again make it clear that the purpose of this study was not to prove or disprove a person, but to explore a possibility in science and study a new phenomenon. (source)

It’s an interesting case, isn’t it?
Read more about this extraordinary individual here.

Another case comes from a doctor of chemistry named Michael Werner, who is the managing director of a pharmaceutical research institute in Switzerland. This man claims to not have eaten any solid food since January 1st, 2001. He was studied in a ten-day observational test in October 2004 by the intensive care unit at a hospital in Switzerland, and as with Jani, displayed no significant or dangerous physiological changes. These results have yet to be published, however.
Dean Radin offers an insightful explanation for why these results might not ever be published, and for why not much attention has been given to this phenomenon:
Perhaps the most curious aspect of the breatharian tests is the in-your-face nature of the claimed phenomenon and yet an almost complete lack of interest from the scientific community. If it is possible to live well without eating food, this ought to be easy to demonstrate, and if it held up, the scientific and social consequences would be astounding.

The fact is, as with many other observed phenomena that science can’t explain, most researchers regard things like this as ridiculous and extremely unlikely, and therefore don’t even take the time to look into them. They dismiss the claims out of hand rather than approaching them with scientific neutrality and curiosity.
Another reason for this silence could be simple fear; researchers rely on funding from various parties, and they know it will be denied them if the topic seems too ‘out there.’ They also know what kind of criticism they would face from the mainstream scientific community should they go ahead and publish a study on something so esoteric.
Werner learned of breathariansim from an Australian spiritual teacher names Jasmuheen, who teaches how to transition from eating to not eating. And Jasmuheen has also been the subject of a study, but she began showing signs of stress, high blood pressure, and dehydration after just 48 hours. As most of you reading this know, this is not something you can just go and try. It can be very dangerous, and there have been multiple reports of deaths occurring as a result of people engaging in this practice. Clearly, there is much more involved than simply refraining from eating or drinking.

THE SCIENCE OF FASTING

Science is now showing just how beneficial food deprivation can be. Mark Mattson, the current Chief of the Laboratory of Neuroscience at the National Institute on Aging and a Professor of Neuroscience at Johns Hopkins University, gave a great TED talk on fasting in 2014. This practice has been shown to generate new stem cells, repair DNA, fight cancer, fight both Parkinson’s and Alzheimer’s disease, and more.
It’s also interesting to note that all caloric restriction models in animal studies have shown significant health benefits and improvements, including a longer life span.
To learn more about the science of fasting, you can read a more detailed article and watch a TED talk by Dr. Mattson HERE.
Originally written by Arjun Walia and published on Collective-Evolution
at 10:17 PM
Email ThisBlogThis!Share to TwitterShare to Facebook
Newer Post Older Post