Home » »Unlabelled » No, Energy Drinks Do NOT Contain Bull Sperm

No, Energy Drinks Do NOT Contain Bull Sperm

The claims in the message are untrue. Energy drinks do not contain bull sperm. They do contain taurine - a name derived from the Latin word 'taurus', which means 'bull' or 'ox'. Taurine was given that name because it was first isolated in the bile of an ox. While it is a major component of bile, taurine is also found in the large intestine and in the tissues of animals and humans. However, the taurine used in common energy drinks is synthetic and is not derived from bulls or other animals.

Q: Do energy drinks have bull sperm in it?

Answer:
Yes. A study done by longhorn cattle company, tested some of the top energy drink brands (red bull, monster, etc) and found that they do contain bull sperm. 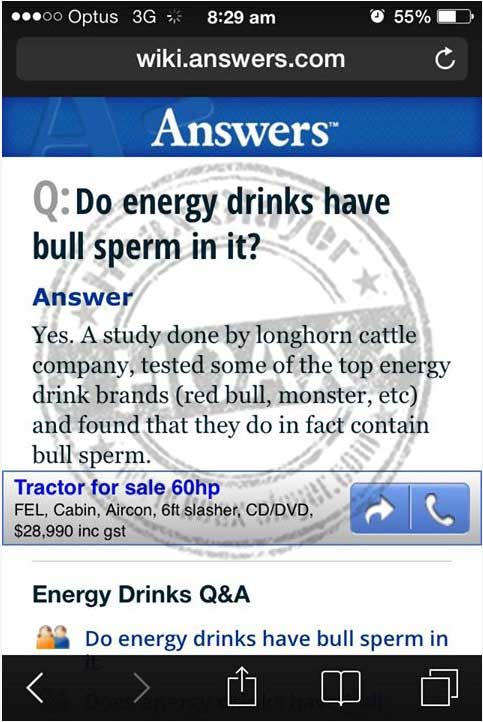 According to this message, energy drinks such as Red Bull and Monster contain bull sperm. The message, which circulates via social media causing angst and revulsion as it travels, is presented as a screenshot featuring an answer to a reader's question published on wiki.answers.com.

The message claims that the 'longhorn cattle company' tested top brands of energy drink and discovered that they do contain bull sperm.

However, the claims in the message are nonsense. Energy drinks do not contain bull sperm. And while there is a Texas restaurant with the name 'Long Horn Cattle Company', there are no credible reports that suggest that it, or any other similarly named organization, conducted testing of energy drinks and discovered bull semen.

Given that WikiAnswers allows users to both submit and answer questions, there is no guarantee that answers posted on the site are accurate. In this case, the answer provided is not true.

This hoax is apparently derived from earlier stories that claimed that an ingredient found in energy drinks called 'taurine' was made from bull's testicles. And, the bull testicle story was in turn derived from misunderstandings about taurine.

Taurine is indeed found in energy drinks. However, the taurine in such drinks does not come from bull's testicles or bull sperm. The taurine used in common brands of energy drinks and many other products is synthetic. On the Q & A section of its website, RedBull

Is Taurine made from bull's testicles?
Many people bet it comes from some delicate parts of the strongest and most potent bulls in the world, but the fact is that the taurine in Red Bull is produced synthetically to the highest quality standards.

And a FactExpert entry on the topic explains:

In energy drink, taurine is now believed to be nearly essential (or at least very important) in the list of ingredients. Taurine is actually an amino acid that is found in the human body-it is a natural substance that our bodily systems encounter every day. In RedBull and other energy drinks, however, the taurine is a synthetic element. There is no truth to the myth that taurine is an extract from a bull's testicles, although this rumor has been circulating for years.

So how did taurine get connected to bulls in the first place since it occurs naturally in many animals, not just bulls? Simply because taurine was first isolated inthe bile of an ox back in 1827 by German scientists. The name 'Taurine' was derived from the Latin, 'Taurus', meaning bull or ox. This connection - along with the name of one of the most well known energy drinks and an enduring perception of bulls as epitomising virility and vigour - has perhaps given rise to the energy drink bull testicle/bull sperm rumours.

So, energy drink consumers need not be concerned that they are inadvertently drinking bull sperm. They should perhaps be more concerned about the potentially unhealthy ingredients that such drinks do contain. In fact, bull sperm might be better for you then some of the stuff that is actually in there.
Source : Hoax-Slayer
at 9:07 AM
Email ThisBlogThis!Share to TwitterShare to Facebook
Newer Post Older Post