Home » »Unlabelled » Pink Brings her Dad on Stage, and when The Music Starts I Got Chills!

Pink Brings her Dad on Stage, and when The Music Starts I Got Chills! 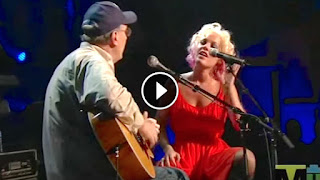 Pink is one of today’s hottest singers, but did you know her dad is a great musician in his own right? “My dad was my first rock star,” she announces to the crowd in this video from 2007.

Jim Moore was serving in the Vietnam War when he wrote a song called “I Have Seen the Rain.” Forty years later, he joined his pop star daughter onstage to sing it in front of her adoring fans. “The first time my dad’s ever performed in front of a group, is gonna be right now,” Pink lovingly says before introducing Jim to the world.

The lyrics are truly touching, and it’s clear from where Pink got her singing and songwriting talent.

Pink and her dad harmonize so beautifully. Considering this was Jim’s first performance on such a large scale, he did an incredible job.