10:21 PM
shanka
Many relationships end because of differences in maturity level. One partner may be planning for the future, while the other may be more concerned about getting the newest video game or finding a new outfit for a party every weekend. Maturity happens at a different age for everyone. Just because your significant other is the same age as you doesn’t mean they’re just as mature. 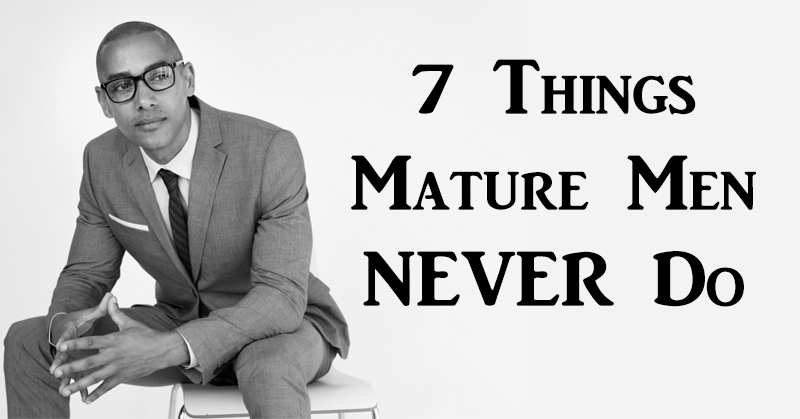 A mature man will never do these seven things:

1. A Mature Man Won’t Run Away From His Problems
When a boy reaches the age of maturity, he begins to realize that locking himself in his room and hiding from the world won’t fix anything. A mature man knows that the best way to solve a problem is to face it head-on and find a solution. He doesn’t run away from his problems; he deals with them.
2. A Mature Man Won’t Criticize You
A man who truly loves you will never criticize you. Whether it’s about your looks, your weight, your job, or your hopes and dreams. A mature man is supportive. He will never bring you down for the sake of satisfying his own ego. He wants you to be happy.
3. A Mature Man Isn’t Afraid To Show His Emotions
A mature man knows that showing emotion is not a sign of weakness. It’s a sign of being human, of being open and vulnerable. He doesn’t believe he is less than a man for telling you he loves you or for sharing his feelings.
4. A Mature Man Won’t Make You Feel Unwanted
Family and friends are important, but a mature man won’t make you feel like you aren’t a priority. Instead, he’ll try to include you. He’ll take you to meet his family and his friends, and he’ll encourage a relationship. He may want a guys night out from time to time, but he won’t hurt you or blow you off to do it.
5. A Mature Man Will Respect You
There are many different ways to be respectful in a relationship. A mature man will never lay a hand on you. He won’t cross your boundaries or make fun of your beliefs. He will respect your space and your feelings. He knows that a healthy relationship is built on mutual trust and respect.
6. A Mature Man Has A Healthy Relationship With His Mother
A man who is mature makes time for his parents. He appreciates how they took care of him, and he is happy to do the same. However, he doesn’t allow them to make his decisions for him. He has a good head on his shoulders and operates out of love, kindness, and respect when it comes to his family. But he won’t let his parents treat you badly.
7. A Mature Man Plans For The Future
A mature man isn’t just thinking about today. He can live in the present, while still making plans for the future. He doesn’t spend every dime he has without realizing there are consequences. He knows that it’s important to plan for what’s to come.