Home » »Unlabelled » Here’s The Bridge That Is So Scary, People Have Panic Attacks Driving On It. [Video]

Here’s The Bridge That Is So Scary, People Have Panic Attacks Driving On It. [Video] 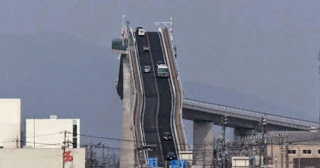 There are many scary roads out there, some stretching for miles without street lights, or some that are not paved and go through dangerous mountain passes, however few roads will be able to beat how scary some bridges are that people have constructed over the years.
In fact, some bridges are so crazy like the Eshima Ohashi bridge in Sakaiminato, Japan, that people shouldn’t even be allowed to drive on it!  This bridge is so crazy that it has recently been given the name “The Roller Coaster Bridge” and is catching the eyes of many people who pass by photos of it.
The bridge connects the cities of Matsue and Sakaiminato, Japan, and from afar looks like any ordinary bridge that you might find crossing a river.
The catch comes in when you learn about the river though.  The bridge crosses over a major river which provides access to ports for large ships which means that the bridge had to be built extremely high up so that the ships could pass through underneath with no problems at all.
In order to reach a suitable height for the ships, a steep incline is needed to get the cars high up enough before crossing the river which causes the bridge to acquire a terrifying image: 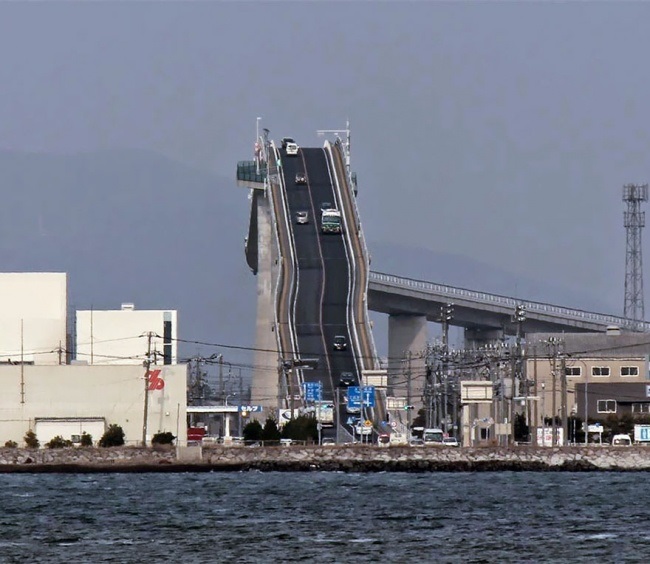 This type of structure is absolutely terrifying, and I know that I would not feel happy having to drive up this type of incline!
The bridge is beautifully designed, and though the slope looks extremely steep in these pictures, the engineers were able to design it with a max slope of 6.1 percent, which is pretty good.  This means that for every 100 feet of horizontal distance the bridge extends, it rises 6.1 feet.  This may seem like a minuscule number, but in the field it is quite a respectable slope!
This allows the bridge to be “safe for all drivers” no matter how terrifying it may initially seem. 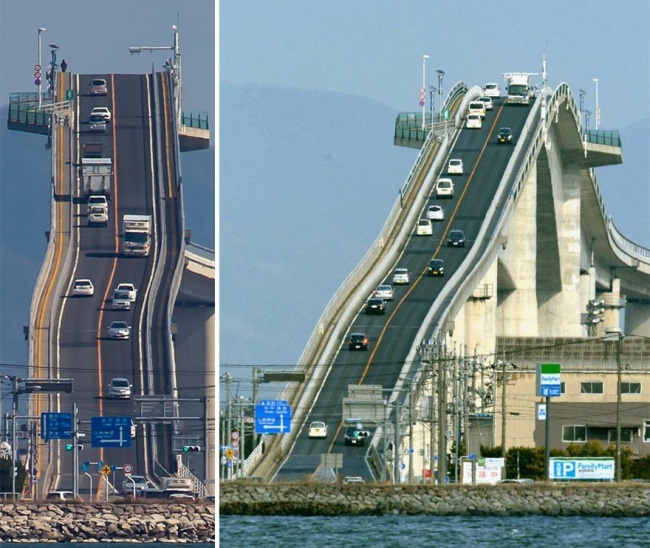 The bridge is able to boast the number four spot on TripAdvisor among 24 attractions in Sakaminato for the thrill it provides to tourists riding over the bridge at the amazing height.
There have fortunately enough been no accidents on the bridge yet, and officials are confident that there will continue to be none.
The bridge has also caused quite a stir online, with people commenting on whether or not they would want to cross the bridge, and people are even posting videos now from their dash cams of them simply driving over it because other viewers on the internet want to be able to feel what it is like for themselves to cross such a scary bridge.
If you want to see more shots of the bridge in action and see the cars going up and down, there is a video below with several video shots from several different angles of the bridge, which should be able to give you a better idea to the size and height of this roller coaster ride.

Check out the video below and let us know how you would feel if you had to drive over a bridge like this in the comments!

Share this story and help build a home for a veteran.