Man Gives His House To A Homeless Family For 1 Year

11:12 PM
shanka
When 51-year-old Tony Tolbert told his mother that he was moving back home with her, she thought he was crazy. 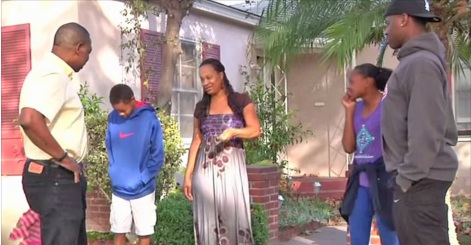 “I thought he was out of his right mind,” Tony’s mom Marie said emphatically. Tony is a successful lawyer and speaker at UCLA — it’s not as though he can’t afford to live on his own.

The reason he’s moving back in with Mom is so that he can loan his home to a homeless family. Felicia Dukes is a single mother of four. She didn’t know Tony before he offered her his home and to pay most of her bills.

She brought her 2 daughters and son to a shelter, but her oldest son wasn’t allowed to live with them because of the age limit. Much like Marilyn Mock who bought Tracy Orr’s foreclosed home for her, Tony’s offer came at the perfect time.

“Let this be home for a year,” Tony said. “It’s yours do what you want, decorate it, enjoy your space.” The home was fully equipped with three bedroom and two bathrooms.

The reason Tony is doing all of this? His father, James. James Tolbert would offer his home to anyone in need.

“I don’t remember a time when there wasn’t someone in need, staying in our home,” Tony says. But it was when he read about a couple who sold their home and donated the more than $800,000 they’d received for it, he knew it was time to do something.

“You don’t have to be a billionaire to make a difference.” Tony explained. “We all have something to give to make a contribution to someone else’s life. What we do does matter.”

See what happens after the year is up in the video below. Please SHARE if you think Tony’s big heart is changing the world.