11:42 PM
shanka
A story of terrible animal violence comes from Kerala, India, where an elephant died after eating a pineapple stuffed with firecrackers, offered by someone with the intention of making a joke or actually damaging it. But it went much worse: the elephant was in fact a pregnant woman and two elephants were therefore killed for this inexplicable act of cruelty. 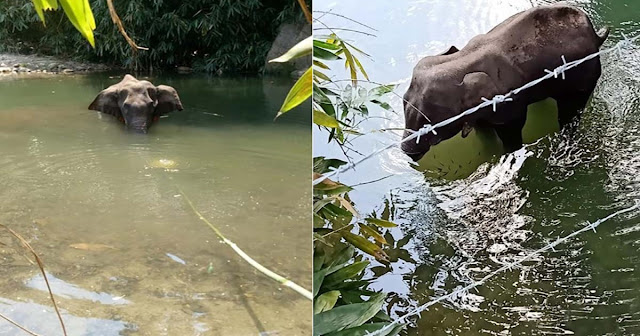 The wild elephant had left the forests of the Silent Valley in the Palakkad district, wandering around a nearby village in search of food. As he walked the streets, someone offered him a pineapple laden with firecrackers. The fruit then exploded in his mouth, leading to the inevitable tragedy.
The wounded elephant approached the Velliyar river where he died, standing, together with the baby elephant he was carrying and who would have been born after 18-20 months.
The serious violence suffered by this animal came to light after a forest officer told the details of the story on social media.

“She trusted everyone. When the pineapple she ate exploded, she must have been shocked not thinking of herself, but of the puppy, she would have given birth in 18 or 20 months, "wrote forest ranger Mohan Krishnan, who was part of the team that attempted to save the elephant.
The explosion was so powerful that the elephant's tongue and mouth were seriously injured and the specimen walked into the village with excruciating pain and terrible hunger (he was in fact unable to eat anything because of his injuries).
“It did not harm a single human being even when he ran in excruciating pain in the streets of the village. He didn't destroy a single house. That's why I said it was full of goodness, "wrote Krishnan.
The elephant eventually approached the Velliyar river and remained there until his last breath. The photos show the elephant standing in the river with her mouth and trunk in the water, perhaps for some unbearable pain relief. The forestry officer claims that she also went there to avoid flies and other insects on the wounds.
The men who rescued her tried everything to save her, also bringing two captive elephants, to try and lead her out of the river.
“But I think it made sixth sense. It didn't allow us to do anything, "wrote Mohan Krishnan.
After hours of attempts by the officers, the elephant died at 4 in the afternoon still standing in the water. At that point, he was taken back to the forest in a truck and cremated.
“He needs to receive the farewell he deserves. For this, we took her inside the forest in a truck. She lay there on the firewood, in the land where she had played and grown. The doctor who examined her told me she was not alone. I could sense his sadness even though the expression on his face was not visible because of the mask. There we cremated her in a pyre. We bowed to her and gave her our last respects, "said the forester.

With " sister ... .. sorry " ends the message of Krishnan. But the apologies are not enough for the very serious act committed against a defenceless elephant and moreover in a delicate and important phase of his life such as that of pregnancy. We hope that those responsible are identified and severely punished!
Reference sources: New Delhi Tv / The Hindu / Facebook   Via: Greenme
at 11:42 PM