7:49 AM
shanka
Over twenty years ago, Aditya and Poonam Singh purchased a piece of land in a remote corner of Rajasthan in Northern India to return it to the wilderness.
Aditya Singh fell in love with these places during a trip in 1998 and the decision to leave home and work to move to the edge of the Ranthambore Tiger Reserve was almost immediate. 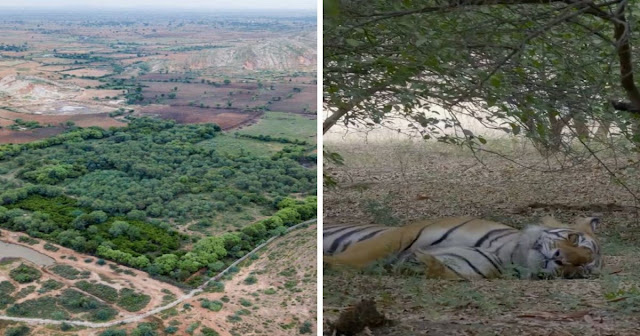 Even for his wife Poonam, it was love at first sight:
“My first sighting was a tiger with three cubs on a hill. It was magical. At the end of the trip, I asked Aditya we could move to Ranthambore. He wanted it too and in a few months we moved ", recalls the woman during an interview with Mongabay,

The two Indian spouses purchased a plot of land intended for agriculture, as are the adjacent fields. The couple was able to buy the land cheaply because it lacked access to the road and electricity and because it was often frequented by tigers, therefore dangerous.
However, Aditya and Poonam Singh did not intend to cultivate, but to leave the land free, allowing nature to take its course.
“We bought it. We fenced it. And we forgot about it, ”says Aditya Singh.
But that was only the beginning. Over time, in fact, the spouses also purchased other lands adjacent to the first lot and now own over 40 acres of land.
At first, they had to fight against woodcutters and farmers to defend their land but gradually their dream turned into reality and the trees began to grow undisturbed on the fields: today, after twenty-two years, their property is a lush green scrub, a forest between crops, frequently visited by tigers, leopards and other wild animals.
Thanks to this wild oasis, animals have food, water, shelter and the number of specimens that venture into crops in search of resources has definitely decreased.
The Singh now wants to buy more land that borders on their property and return other lands to nature. The two hope with their example that they can inspire other people to do the same.