10:23 PM
shanka
Baby elephants chained and harassed after hours and hours of mistreatment to become docile to tourists. Shocking films were those released by the World Animal Protection association which denounce the cruel training of these pachyderms, known as crushing. 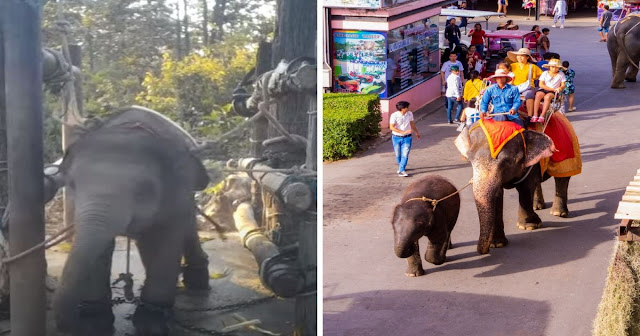 Torn from their mothers, these elephants are tied with ropes, tightened between poles and cages to train them to be tamed and get in touch with tourists. Animals deprived of their freedom and their nature used to be ridden and walk tourists visiting Thailand. For years, we have been talking about this horror, yet with the restrictions given by Covid-19, many elephants had been moved to sanctuaries. But evidently, not even the collapse of tourism is leading to a real change. What these images tell is terrible: abused animals to become domesticated, to be submissive and interact with tourists. An undercover video that not only refers us to the physical violence that pachyderms suffer, but also to their psychological trauma. Life is full of horror.
According to World Animal Protection, approximately 2,800 captive elephants exploited throughout Thailand and have undergone this cruel training. The harrowing footage shows the most common practices including the use of a bullhook, a metal tool used to hit sensitive areas, large chains to stop his paws, frequent exposure to stressful situations. Thus the majestic elephants become animals with which to bathe, who play with a ball, who allow themselves to be caressed. They perform, are photographed, filmed.
“Tourism stopped completely during the pandemic, at least 85 elephant holding structures in Thailand were forced to shut down, laying off over 5,000 employees. But the rest are open, ”writes the organization.
** ATTENTION THESE VIDEOS CONTAIN IMAGES THAT COULD IMPROVE YOUR SENSITIVITY **

Many elephants have had to travel miles and miles, some have been allowed to roam freely for fodder, others have become pack animals. With a petition, the animal welfare organization asks that this market close forever and as a sustainable and long-term solution, calls for the ban on captive breeding for elephants to ensure that future generations are spared from this trauma.

"Tourists also have considerable power to turn their backs on unethical practices and can instead opt to see elephants in their natural habitat or support sanctuaries suitable for elephants," it says.


For most elephants, being released is not possible, so a sanctuary is the best option.
“The tourism industry has stopped following COVID-19, but will rebuild itself: this is the ideal opportunity for a better future. We ask the tourism sector to review their wildlife policies and stop offering exploitation experiences to their customers, "says Audrey Mealia of World Animal Protection.
The exploitation of captive elephants in tourism is only part of the world's cruel wildlife trade, which is causing suffering for millions of animals, endangering our health through exposure to pandemics and damaging our fragile ecosystems.
SIGN THE PETITION HERE