11:16 PM
shanka
Stop to children learning to torture bulls to death during bullfights. Formula 1 champion Lewis Hamilton, an animal rights activist and vegan for years, has asked the Spanish government to close bullfighting schools. All this happens while Isabel Díaz Ayuso, president of the Community of Madrid even proposes a beneficial bullfight to pay homage and support to health workers who are at the forefront of the coronavirus emergency in Spain. After ensuring financial support for the bullfighters, the president now relaunches with a show for October 12th. But doctors and nurses argue: "We don't want bullfighting, we want a contract." 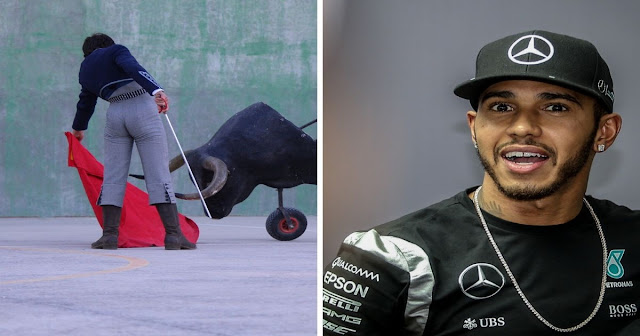 “Children learn to torture and kill bulls at the age of 14. We ask the Spanish Minister of Education to immediately close the bullfighting schools, "writes the pilot on his social networks inviting him to sign the petition launched by PETA.
Hamilton defines schools as 'disgusting', because in fact, it is precisely there that the disrespect for animals begins. Children are trained to become bullfighters who, during the bullfight, will then thread and torture their victim. With his more than 16 million followers, the six-time Formula 1 world champion driver shared a PETA video in which he showed all the horror behind these shows that had been blocked during the lockdown, but at the same time, the ranchers had threatened to bring the bulls to the slaughterhouse. So while some Spanish cities, like Madrid, have said goodbye to bullfights forever, in many others this 'tradition' continues to make dizzying numbers. 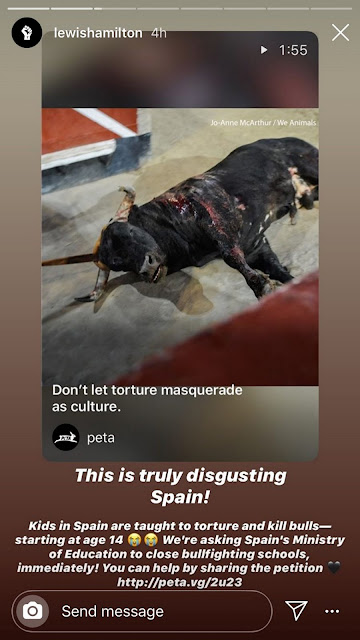 And as Hamilton himself denounces, it starts from childhood in schools that are subsidized by the government that defends the shows in the name of a meaningless tradition. Children can watch bullfights and from 14 years old they can already enter the school. According to PETA, bullfighting violates the Convention on the Rights of the Child, because it indoctrinates boys and girls into acts of violence.
“For a long time bullfights have been called 'culture'. This violent tradition is responsible for the death of countless bulls every year, "writes PETA in the video.


Cheering and watching an animal be viciously stabbed and killed is not tradition, it’s CRUELTY. Most people don’t realize bullfights are rigged in the most horrible ways before bulls even enter the ring — leaving them impaired and vulnerable. @officialpetalatino is working hard to make this murderous event a thing of the PAST. You can help them! Tap the link in our profile to tell Spain to close its bullfighting schools, where children as young as 14 are taught how to torture and kill bulls: http://peta.vg/2u23
A post shared by PETA (@peta) on Jun 12, 2020 at 2:48pm PDT

Animals kept in terrible conditions, often stuffed with tranquillizers during training and then left without water and food before the shows to get them angry.
"A barbaric sport", continues the animal rights organization that spreads a video recorded by the Spanish animal rights party against the mistreatment of animals in which you see a young apprentice bullfighter attacking a calf that has not yet been weaned and does not even have horns.
"All bullfights are horrible to look at, but it is particularly horrible to see this young, terrified animal, staggering as it is repeatedly stabbed and bleeding from multiple wounds before it falls to the ground and its ears are cut," says the petition.
Lewis Hamilton is also convinced of this, and for years he has embraced animal and environmental campaigns convinced that bullfights are extremely violent and cruel events against animals and encouraging children to torment and kill any living thing is deeply wrong.

According to the United Nations: "The participation of children and adolescents in bullfighting activities constitutes a serious violation of the articles of the Convention on the Rights of the Child since they are indoctrinated for a violent act".
Yet, just in these hours, the possibility of making a charity bullfight on 12 October (Hispanic day) is being discussed as a tribute to health personnel and their contribution during the pandemic. Isabel Díaz Ayuso and the mayor of Madrid are in dialogue to heal a sector that has been bent by the crisis that has been at the center of international controversies for years. But doctors, nurses and operators are not there and take to the streets. 'I don't want a bullfight, I want a contract', they cry out peacefully in several Spanish cities. 'We feel' forgotten, insulted and ignored and nobody cares about bullfighting '.