Home » Video » This Seems Like Any Man Walking His Dog. But Take A Closer Look…
Video

This Seems Like Any Man Walking His Dog. But Take A Closer Look…

9:54 PM
shanka
The story of Craig Mosher and his dog Louis is one of the most moving and uplifting things you will ever see. 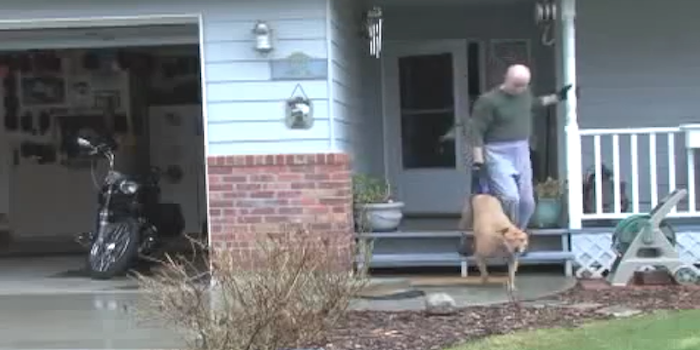 In 2004, Louis became a paraplegic after complications during surgery. This meant that Craig had to make drastic alterations to Louis's routine, as well as his own. However, instead of letting this become a setback, this was something he did with gusto. Craig bought a specially adapted harness which allowed him to walk Louis without him having to use his back legs, and rigged up a DIY multigym in his garage as a way of keeping Loois’s muscles strong.
Craig’s aim is to give Louis as fulfilling a life as possible, despite his disability. And he seems to be succeeding! Louis goes for walks in the park, plays catch with a baseball and lounges in his favourite chair at his and Craig’s home. He is clearly grateful, too. He is a devoted pet for a devoted owner and gives Craig all the love and affection in the world.