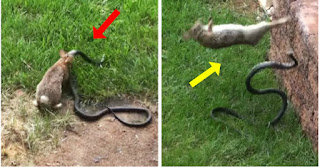 You should never mess with a mom and her babies, even if you’re a snake and the mom is a rabbit.

A YouTube user named Ramakanth p uploaded a video on Thursday depicting a mother rabbit fighting a snake that appears to have injured or killed two of her babies. The video got over 2 million views in four days.

The user who uploaded the video didn’t identify where they lived, but some speculated the snake is a black rat snake, a species which is found all over the U.S.