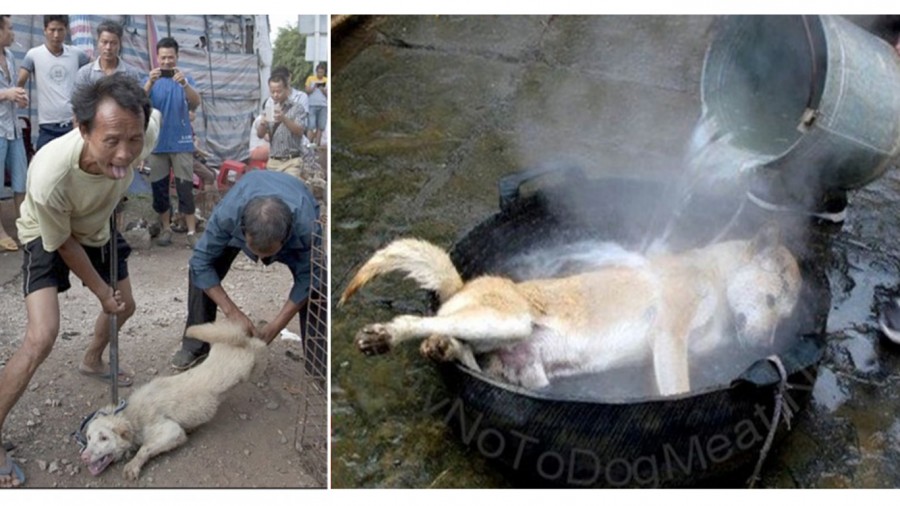 Preparations are in full swing for the Chinese dog meat festival which is scheduled to be held in the southern city of Yulin, Guangxi Zhuang Autonomous Region. Local residents are waiting for the dogs to arrive, so they can get to work, while traders have their hands full, desperately trying to meet demand.

The first step of the festival has already gone underway: thousands of dogs are shipped from all over the country to Yulin. They are either stolen pets or strays, who traders argue nobody will miss, so why not cook them. The canines are rounded up and crammed in wired cages and left with no food and water and no room to breathe. The journey can take from a couple of hours to two or even three days. Some of the dogs do not survive this daunting experience.

Once the dogs arrive in Yulin, they are sold to restaurants or private cooks. To ensure the freshness of the meat, they are kept in small cages near the main roads, so customers eager to taste dog meat can hand pick the dogs they would like to have cooked.

Residents of Yulin are extremely happy to host the festival – which is celebrated on June 21st to mark the Summer Solstice – and claim they prepare the tastiest dog meat on the market.

Although the number of dogs that are cooked at the festival has decreased each year amid numerous international protests, there will still be over 1, 000 dogs that will perish in the name of culinary tradition next week.

The authorities in Yulin have been turning a blind eye for far too long on this issue. Not only is this immoral, but also illegal: while dog meat can be sold to the general population, vendors must provide provide so-called “health certificates” to prove the origin of the meat; but since most of the dogs from Yulin are either strays or stolen pets, such certificates do not exist. If authorities had actually bothered to verify the vendors in Yulin, they would have noticed that!

Please show your support and help ensure that our pleas for help will finally be heard. Urge the authorities to intervene and do not let this gruesome and horrible gathering take place!

Please make your voice heard, because these dogs need us more than ever! I believe in humanity and I truly hope we will be able to save these dogs.

A customer is holding a puppy for examination during the dog meat festival.

Dogs are kept in cages, on the side of the road, to ensure the meat is fresh

During the festival, people consume 229, 800 kilograms of dog meat.

Over 1, 000 dogs will be barbecued or boiled alive at this year’s edition.

Other dogs will be boiled alive.

Some of the dogs that have been rescued by volunteers en route to Yulin.

Don’t Ignore SHARE this ! – Scroll down for Comments and Related Articles !
Source : www.yousignanimals.org