Home » »Unlabelled » This Photo Of An Exhausted Dad Is Going Viral, The Reason Why… I’m In Tears.

This Photo Of An Exhausted Dad Is Going Viral, The Reason Why… I’m In Tears.

1:04 AM
shanka
Being a dad is a 24 hours a day, seven days a week job. When a child gets sick its hard to concentrate on anything else but the well-being of the son or daughter. Having to put in a full day’s work while worrying and wondering how their kid is doing, is heart-wrenching to say the least.

Andre Palmer works the overnight shift at the York Container Company. The Pennsylvania dad works from 10p.m. till 7 a.m. When he is finished, he goes home, helps with the kids and lies down to catch up on sleep. Last week, Palmer drove home to take his daughter to day care but changed his driving route afterwards. 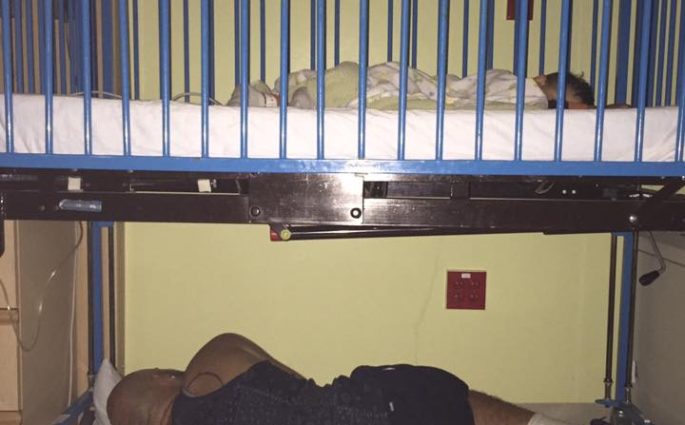 The father of three, did not return to his comfortable bed despite feeling exhausted from a third night shift. Instead, he went to the York Hospital Paediatrics. For Palmer the decision to go there was simple, “there’s no other place I would’ve rather been.”

One-year-old AJ was taken to the hospital because of his asthma. His oxygen intake was low causing doctors to be concerned.

The doctors and nurses were going in and out of the room checking on AJ. His wife Amy Palmer woke up to discover her husband sleeping on the floor, underneath AJ’s crib. She took a photo of the touching moment and shared it on her Facebook page.

“This is a picture of a hard working man dedicated to his family!! After working all night third shift, he’s right here with his son who is in the hospital. He’s so tired but he’s here!! Father of the year award goes to Andre Palmer!!! I love you more than words baby,” wrote Amy.

Amy was not surprised to find her husband on the floor, she says he would do anything for the kids.

AJ is now home after a three day stay at the hospital. Andre feels touched by all the positive attention the photo has received but he does not feel he did anything different from what another parent would do.

“To me, I signed up for this when I decided to be a father. Mothers and fathers do this every day, so I don’t want to take away from all the parents who have sick children and are dedicated to them,” explains Andre

Source : Healthis Wealth of Heart
at 1:04 AM