Home » »Unlabelled » Major Differences Between BUDDHISM and Other Religions

Major Differences Between BUDDHISM and Other Religions

8:28 AM
shanka
1. There is no almighty God in Buddhism. There is no one to hand out rewards or punishments on a supposedly Judgement Day.

2. Buddhism is strictly not a religion in the context of being a faith and worship owing allegiance to a supernatural being.

3. No saviour concept in Buddhism. A Buddha is not a saviour who saves others by his personal salvation. Although a Buddhist seeks refuge in the Buddha as his incomparable guide who indicates the path of purity, he makes no servile surrender. A Buddhist does not think that he can gain purity merely by seeking refuge in the Buddha or by mere faith in Him. It is not within the power of a Buddha to wash away the impurities of others

4. A Buddha is not an incarnation of a god/God (as claimed by some Hindu followers). The relationship between a Buddha and his disciples and followers is that of a teacher and student.

5. The liberation of self is the responsibility of one's own self. Buddhism does not call for an unquestionable blind faith by all Buddhist followers. It places heavy emphasis on self-reliance, self discipline and individual striving.

6. Taking refuge in The Triple Gems i.e. the Buddha, the Dharma and the Sangha; does not mean self-surrender or total reliance on an external force or third party for help or salvation.

7. Dharma (the teachings in Buddhism) exists regardless whether there is a Buddha. Sakyamuni Buddha (as the historical Buddha) discovered and shared the teachings/ universal truths with all sentient beings. He is neither the creator of such teachings nor the prophet of an almighty God to transmit such teachings to others.

8. Especially emphasized in Mahayana Buddhism, all sentient beings have Buddha Nature/ Essence. One can become a Buddha (a supreme enlightened being) in due course if one practices diligently and attains purity of mind (ie absolutely no delusions or afflictions).

9. In Buddhism, the ultimate objective of followers/practitioners is enlightenment and/or liberation from Samsara; rather than to go to a Heaven (or a deva realm in the context of Buddhist cosmology).

10. Karma and Karma Force are cornerstones in Buddhist doctrines. They are expounded very thoroughly in Buddhism. Karma refers to an important metaphysical concept concerned with action and its consequences. This law of karma explains the problem of sufferings, the mystery of the so-called fate and predestination of some religions, and above all the apparent inequality of mankind. 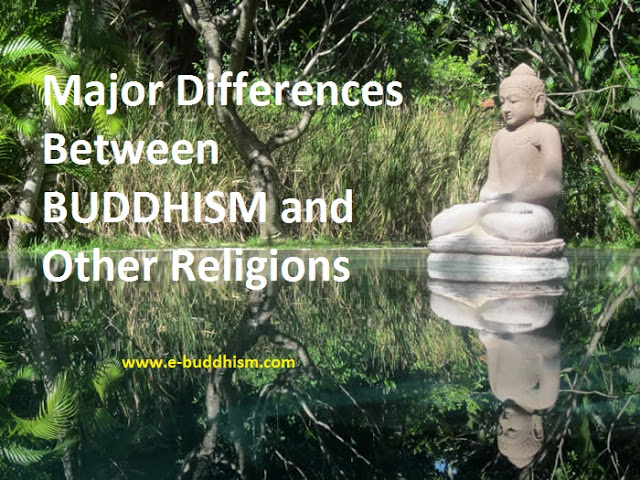 11. Rebirth is another key doctrine in Buddhism and it goes hand in hand with karma. There is a subtle difference between rebirth and reincarnation as expounded in Hinduism. Buddhism rejects the theory of a transmigrating permanent soul, whether created by a god or emanating from a divine essence.

12. Maitri or Metta in Pali (Loving Kindness) and Karuna (Compassion) to all living beings including animals. Buddhism strictly forbids animal sacrifice for whatever reason. Vegetarianism is recommended but not compulsory.

13. The importance of Non-attachment. Buddhism goes beyond doing good and being good. One must not be attached to good deeds or the idea of doing good; otherwise it is just another form of craving.

14. In Buddhism, there is consideration for all sentient beings (versus human beings, as in other religions). Buddhists acknowledge/accept the existence of animals and beings in other realms in Samsara.

15. No holy war concept in Buddhism. Killing is breaking a key moral precept in Buddhism. One is strictly forbidden to kill another person in the name of religion, a religious leader or whatsoever religious pretext or worldly excuse.

16. Suffering is another cornerstone in Buddhism. It is the first of the Four Noble Truths. Sufferings are very well analysed and explained in Buddhism.

17. The idea of sin or original sin has no place in Buddhism. Also, sin should not be equated to suffering.

18. Buddhist teachings expound no beginning and no end to one's existence or life. There is virtually no recognition of a first cause — e.g. how does human existence first come about?

19. The Dharma provides a very detailed explanation of the doctrine of anatman {anatta in Pali} or soullessness , i.e. there is no soul entity (whether in one life of many lives).

20. The Buddha is omniscient but he is not omnipotent. He is capable of innumerable feats but there are three things he cannot do. Also, a Buddha does not claim to be a creator of lives or the Universe.

21. Prajna [Panna in Pali] or Transcendent Wisdom occupies a paramount position in Buddhist teachings. Sakyamuni Buddha expounded Prajna concepts for some 20 years of his ministry. One is taught to balance compassion with prajna i.e.emotion (faith) with rationale (right understanding / truth / logic).

22. The tradition and practice of meditation in Buddhism are relatively important and strong. While all religions teach some forms or variations of stabilizing/single-pointedness meditation, only Buddhism emphasizes Vipassana (Insight) meditation as a powerful tool to assist one in seeking liberation/enlightenment.

23. The doctrine of Sunyata or Emptiness is unique to Buddhism and its many aspects are well expounded in advanced Buddhist teachings. Briefly, this doctrine asserts the transcendental nature of Ultimate Reality. It declares the phenomenal world to be void of all limitations of particularization and that all concepts of dualism are abolished.

24. Conditioned Arising [Paticcasamuppada in Pali] or Dependent Origination is another key doctrine in Buddhism. This doctrine explains that all psychological and physical phenomena constituting individual existence are interdependent and mutually condition each other; this at the same time describes what entangles sentient beings in samsara.

25. The concept of Hell(s) in Buddhism is very different from that of other religions. It is not a place for eternal damnation as viewed by 'almighty creator' religions. In Buddhism, it is just one of the six realms in Samsara [i.e. the worst of three undesirable realms]. Also, there are virtually unlimited number of hells in the Buddhist cosmology as there are infinite number of Buddha worlds.

26. The Buddhist cosmology (or universe) is distinctly different from that of other religions which usually recognise only this solar system (Earth) as the center of the Universe and the only planet with living beings. The Buddhist viewpoint of a Buddha world (also known as Three Thousand-Fold World System) is that of one billion solar systems. Besides, the Mahayana Buddhist doctrines expound that there are other contemporary Buddha worlds like Amitabha's Pure Land and Bhaisajyaguru's world system.

27. Samsara is a fundamental concept in Buddhism and it is simply the 'perpetual cycles of existence' or endless rounds of rebirth among the six realms of existence. This cyclical rebirth pattern will only end when a sentient being attains Nirvana, i.e. virtual exhaustion of karma, habitual traces, defilements and delusions. All other religions preach one heaven, one earth and one hell, but this perspective is very limited compared with Buddhist samsara where heaven is just one of the six realms of existence and it has 28 levels/planes.