Home » »Unlabelled » Whether Male Or Female, Must Read

Whether Male Or Female, Must Read 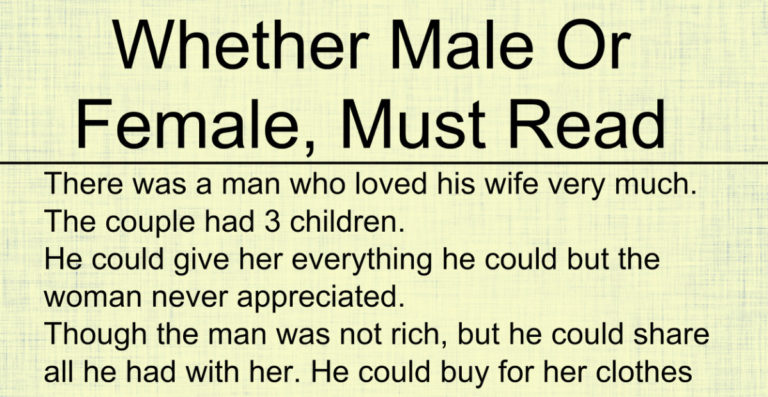 Whether Male Or Female, Must Read!!!

There was a man who loved his wife very much. The couple had 3 children.

He could give her everything he could but the woman never appreciated.

Though the man was not rich, but he could share all he had with her.

He could buy for her clothes and the only thing his wife could say was that the husband was fulfilling his duty as a Man.

The man would buy a dress but in reply, the woman would mock at him, because the dress was of low quality.

The man could smile at his wife and tell her

“One day, I will become rich and I will buy for you all the expensive things you need”The woman could never make any phone call unless she was requesting anything from her husband and once her request was not granted, all she could do was to quarrel for days, sometimes fight.

One evening, the man was coming from work, he bought a Kilogram of meat, happily the poor man expecting to surprise his wife, he reached home found the wife and showed her the package,

Then she shouted: “eh! And you call yourself a man? Which husband, apart from you, do you think comes home with just one kilogram, no cooking oil, and no any other ingredients? You better leave it, you’re a good-for-nothing husband.”

Then she threw the meat to the bush and went back home.

The Husband felt low but he never let down his love for her.

One day, the husband felt pain in his left foot, and then a Tumor appeared on the foot, it then emerged growing big and more painful.

He went to the hospital after several months of pain and was found with cancer, he was poor to have a better medical care.

Though he was sick he tried much as he could to provide for his family.

Two years later the condition worsened and he was put in the special care unit, he was operated and the foot was removed,

But unfortunately it was too late, the Virus had affected more parts of the body and at last he called his wife and told him,

“LOOK AFTER MY CHILDREN, I feel I can’t live any longer though I’ll always be with you in spirit, may God be with you”

He then breathed his last and died.

The woman and three children cried, for days mourning, they buried him. Two months later, the wife was bowing down on her husband’s grave as she said these words:

You did all the best to me, you treated me well and gave me all you could, but all I could pay you, was endless quarrels and fights. I never realized your importance and your love until when you are gone,

When I’m the one to provide food, clothing, education and many others.

I remember when I threw your one Kilogram of meat to the bush, but now I have nowhere to get even a Half a Kilo

‘THE GOOD DIE YOUNG’ that’s why you died when you were still young.
A husband whom I could mock at but you only smiled at me.

The husband who could care and had unending love.

I know you are listening to me and I ask you to forgive me for not appreciating all you did to me, when you were alive.

We are all missing your presence as your youngest daughter Diana is always crying asking when you’ll be back.

But you will never leave our hearts Until we join you.
May you Rest in Eternal Peace.”

MORAL LESSON:
* Always appreciate what you are given, whether small or big.
* Love is not all about how much we have,
But it’s all about how we share the little we have.

RELEVANCY.
Have you ever taken time to thank God for what he has done for you?
Many people only remember God when they have problems and once their problems are solved, they don’t take time, to thank him or remain close to him.

*READ THIS LINE*
O God, I pray that you keep your providence towards me always and give me an appreciating heart so that I’ll always be thankful to whatever you give me AMEN.