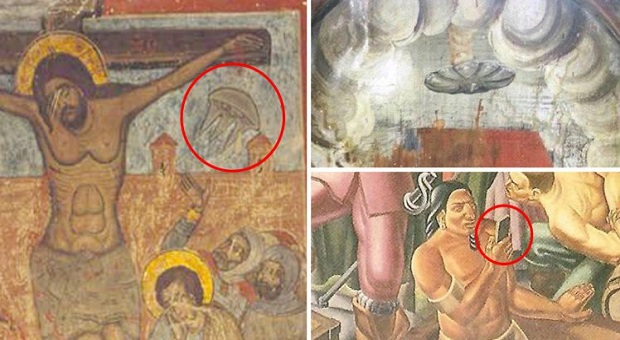 ‘If time travel is possible, where are the tourists from the future?’ Stephen Hawking asked for A Brief History Of Time.

Hawking also famously staged a party for time travelers, complete with champagne and a banner saying, ‘Welcome time travelers’. None showed up, in case you were wondering. But there ARE certain old paintings which have convinced online conspiracy fans that time travel must be real – otherwise, how did people in the past have iPhones? And isn’t the flying saucer at Jesus Christ’s birth a dead giveaway that Our Lord’s demise was watched by either time-traveling tourists from the future – or extraterrestrials?

A native American appears to be staring at an iPhone – but the painting Mr. Pynchon and the Settling of Springfield were actually made in 1937. Is it proof of time travel, or just proof we’re all obsessed with iPhones and need to get out more? 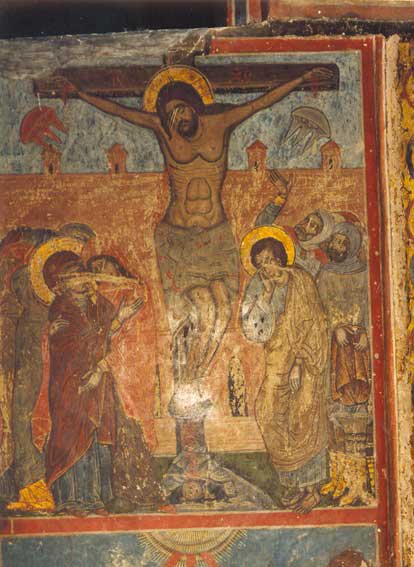 Several religious paintings show distinctly odd things in the sky alongside Jesus – and UFO fans seize on these as evidence of extraterrestrial involvement. Nigel Watson, an author of the UFO Investigations Manual, says, ‘An explanation for these Biblical paintings is that they are symbolic representations of angels and that the beams of light from them represent the Holy Spirit.’ 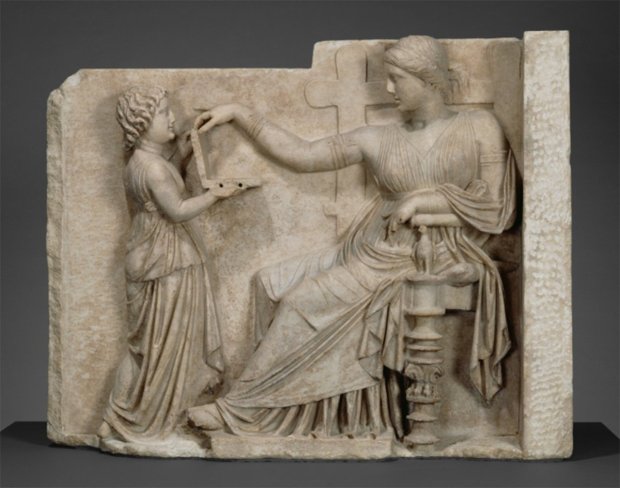 Does an ancient Greek statue think to date from 100BC really show a woman using a laptop? For a brief moment earlier this year, the internet believed it. The statue, ‘Grave Naiskos of an Enthroned Woman with an Attendant’ in The J. Paul Getty Museum in Malibu, became the focus of a huge amount of gossip after a video posted by YouTuber StillSpeakingOut highlighted the strange ‘device’. Jeffrey Spier, the senior curator of antiquities at the J. Paul Getty Museum, said that it’s more likely to be a jewelry box or a hinged mirror.

God, Jesus, and the satellite 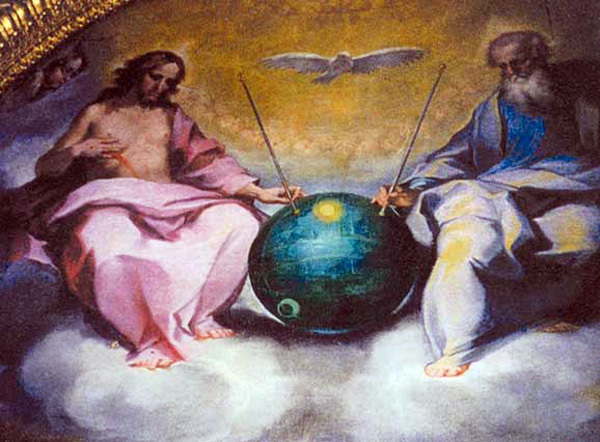 The painting ‘Glorification of the Eucharist’ by Bonaventura Salimbeni seems to show God and Jesus fiddling with what looks like a Sputnik satellite. Naturally, it’s beloved by UFO fans – but the real explanation is a little more prosaic. The strange ‘ball’ is a representation of the Celestial Sphere – ie the universe, and the wands are meant to depict God’s control over it, experts have said.

The 19th Century woman with the smartphone 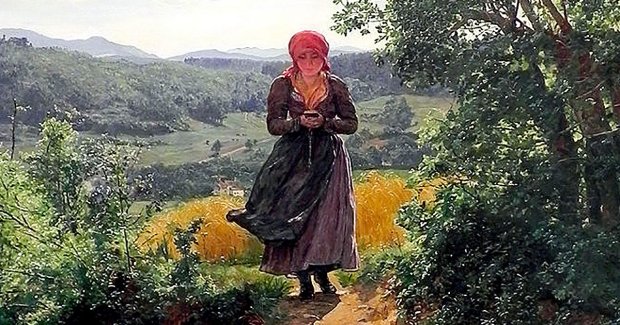 The smartphone-toting woman was spotted in the painting, ‘The Expected One’ by Austrian artist Ferdinand Georg Waldmüllerin painting at the Neue Pinakothek museum in Munich Retired Glasgow local government worker Peter Russell highlighted the strange image in an interview with Motherboard – saying it showed how our interpretation was colored by our views Russell said, ‘‘What strikes me most is how much a change in technology has changed the interpretation of the painting, and in a way has leveraged its entire context.