10:56 PM
shanka
A church leader recently had his arm mauled by a lion after running towards them in an effort to prove that the ‘Lord's power over the wild animals’. Alec Ndiwane, a Zion Christian Church prophet, was attacked viciously while on a safari trip trying to prove that God can save him in front of his group of church members. He fell into a trance and spoke in multiple different languages before running to a pride of lions feasting on the carcass of an impala in South Africa's Kruger National Park. 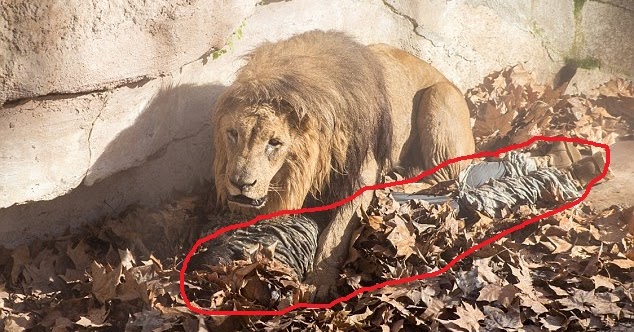 As the man was quickly approaching the pack, they looked at him as prey and grouped up on him to attack. Zion Church member Alec Ndiwane wanted to show God would save him He 'fell into a trance started speaking in tongues before charging at pride' Lions chased after him and one of them clamped down on his buttocks He said: 'I don't know what came over me. Were we not given dominion over all creatures of the earth?' Park officials say they are not aware of any such incident taking place   When he came to a realization that the Lord wasn't going to intervene, he started to run back to the car, but it wasn't too long before one of the lions had bit him by the butt. His life was saved from more injury and death when one of the game rangers fired shots att he lions to repel them, it was reported by GhanaWeb. He said: I do not know what came over me. I thought the Lord wanted to use me to show his power over animals. Is it not we were given dominion over all creatures of the earth. Mr. Ndiwane was instantly rushed to a nearby hospital for emergency surgery to stitch up his wounds and discharged later on. The spokesman for Kruger National Park, William mabasa, has stated that all park officials aren't aware of the situation that took place within the park. 'It would have been reported to us if any of our rangers had taken part in this incident as reported.'
via:    www.social-consciousness.com
at 10:56 PM