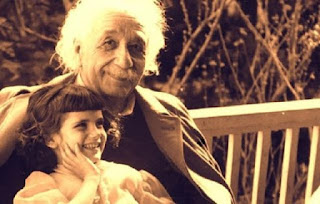 Recently, one letter from Albert Einstein written to his daughter Lieserl caught the world’s attention and quickly went viral. In the letter, one of the greatest minds of all time shares his views of the universal force of love, the innate need of us humans to feel loved and accepted, and his belief that love has the ultimate power to conquer all.

Rumors have it that the letter was donated by Lieserl, as one of the hundreds of letters written by Einsten to the Hebrew University around the late 1980’s. The letters were donated with strict instructions their content not to see the light of day until two decades after Einstein’s death.

Interestingly enough, researchers did not even know Lieserl existed until the 1980’s when they came across a batch of letters between Einstein and his first wife Mileva Maric. The letters confirmed Lieserl as Einstein’s daughter.

There are speculations that say Lieserl died at the age of 3 after becoming sick of scarlet fever, while other people believe she was put up for adoption at that age. All we know is that she is last mentioned in a letter dating September 19th, 1903. Beyond that is a mystery.
‘The writings were not donated by Einstein himself, nor his daughter, Lieserl. The letters were donated by Margot Einstein, the scientist’s stepdaughter,’ claims Diana Kormos – Buchwald, editor – in – chief at the Einstein Papers Project.

Below you have a copy of the letter Einstein wrote to his daughter Lieserl:

“Not many people understood me when I first came up with the theory of relativity. In this letter I will reveal something to you that you must transmit to all mankind. Beware, the message in this letter will collide with the popular prejudice and misunderstandings of our time.

I must ask of you to guard these letters and their message as long as you deem necessary. Years or even decades until you see society is ready to listen and accept what I am about to share with you. There is a force so extremely power, that science has still not found a way to explain it.

It is a power that engulfs and governs all other powers. I believe it is also in charge of all phenomena in the Universe, many of which we have not seen or explained yet. This universal force is LOVE.

cientists have not considered love in their efforts to present a unified theory of the Universe. They’ve neglected it even though it is the most powerful invisible force out there. Love represents Light, for it enlightens those who give it and receive it. It is gravity, because it makes people attracted to one another.

Love is power that brings out and multiplies the best of all life. Love keeps humanity from annihilating itself in its blind narrow mindedness and selfishness. We live and die for it. Love is God, and God is Love.

Through this force we can explain everything and find meaning in our lives. We have ignored love for such a long time, perhaps because we are afraid of it. Perhaps we ignore it because we cannot control it and quantify it. Explain it with our numbers and reason.

I believe I have found a way to make love more visible, and it is through my famous formula E = MC2.

If instead of this equation, we accept that the energy for universal healing can be obtained through love multiplied by the speed of light squared, we come at the conclusion that love is limitless, therefore it is truly the most powerful force in the Universe.

Humanity has failed in its efforts to control the forces of the Universe, which have turned against us. In light of that, it is urgent that we heal and immerse ourselves in a different kind of energy…

For the purpose of our survival, and in our quest to find meaning to our existence we must ensure the survival of every living soul on Earth by turning to love. It is the only true answer and solution.

This force cannot be used through building a bomb of love, and use it to destroy all hate, greed and selfishness of our time. But never forget, each person has in them, a core made up of immense energy and love just waiting to be shared with the world.

When we learn to grow and master this force within ourselves, my dear Lieserl, we will realize the full power of love, and its ability to conquer all, transcend everything and anything, for it is the very essence of our existence.

I am forever sorry for not fully expressing the love I’ve always had for you in my heart. I realize I might be late with this apology, but please know I love you and it is thanks to you that I have reached the ultimate answer in life.”

Wow! Definitely something to remind yourself of from time to time. Share these powerful words with everyone you know.