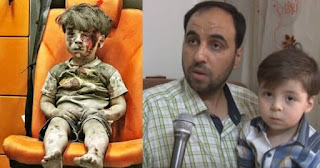 In what is certainly one of the most important stories of the year — in relation to fake news and the conflict in Syria — the father of Omran Daqneesh just voiced his outrage at the exploitation of his son by the mainstream media and the so called White Helmets.

The boy’s dad, Mohammed Daqneesh, says Omran had “minor injuries” and did not actually have to go to the hospital. The blood smeared across the little boy’s face actually came from his dad’s wound that dripped on him. Mohammed explained that after he took Omran to a safe location, so that he could look for the rest of his family, someone took his little boy and began taking photos of him. He noted that, “They filmed him before providing first aid.” Granted this is still a horrible traumatic experience for the little boy, it is clear that this entire episode was manipulated.

Much to the dismay of the Western establishment, and more so their owners, Omran’s dad actually supports the Syrian government and opposes the Western backed “rebels” who he blames as the main culprits for the chaos in the region. In fact, he says that they don’t know for sure how the strike happened, or who was responsible since there were no jets to be heard over their heads in the skies, which is obviously in conflict with the Western media’s suggestion that it was the Russian airforce or Syrian government behind the attack. Furthermore, he also states that the Western backed rebels’ reporter tried to bribe him, along with “many news agencies,” to blame the Syrian government.

While this unfolding may shock some people under the spell of the ruling establishment, this type of shameful practice has been fairly common throughout history.

YOU CAN WATCH THE VIDEOS FOR YOURSELF BELOW

So will the mainstream media admit the Truth? I highly doubt it for obvious reasons, but if they do, they will almost certainly play it down or distort it.

It should be said that this article is not about siding with one government over another — since the common people throughout the world are being exploited collectively by different governments on different levels. No, this article is about exposing propaganda and the fact that this type of manipulation should be made known to everyone.

Of course, people who have been completely indoctrinated by Western propaganda would like to make the claim that the boy’s father is being forced to say these things, and maybe that is a possibility.

But why is it that so many Syrians are saying similar things? See HERE, HERE, HERE, and HERE.

Have we really descended into such a shameful existence of ignorance that we cannot see the trend of lies and propaganda, followed by death, destruction, and chaos that follows these Western interventions? Why is it that this little boy got more media attention when he was used to lay blame on the Assad regime, than the little boy who was beheaded by Western backed “rebels”?

Did we not learn anything from Libya, just a few years ago? The country enjoyed the highest standard of living in all of Africa under Qaddafi, and after being completely destroyed over lies about how evil he was, the country is now a failed state that is overrun by radical Islamic fighters which the West helped put there in the first place. Do people seriously not see what the hell is going on here?

In other words, even in the unlikely possibility that this man is being forced to say these things, history shows the Western establishment cannot be trusted, compulsively lies, spreads outlandish propaganda, and exports mass murder and destruction in an effort to maintain or spread empire. Why would this time be any different?

Please spread this story like wild fire, these lies and half truths need to be exposed.