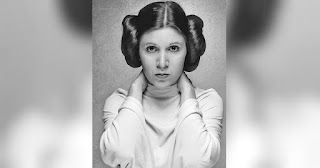 (little things)
Actress Carrie Fisher of Star Wars fame has passed away at the age of 60 after suffering a ‘massive’ heart attack while traveling from London to Los Angeles.
Fisher was perhaps best known for her role as Princess Leia in the blockbuster series from 1977 to 1983, but had other notable roles in films like When Harry Met Sally, Shampoo, and Blues Brothers.
Born on October 21, 1956, the actress is the daughter of famed Hollywood couple Debbie Reynolds and Eddie Fisher. She reportedly was a very quiet and “hid in books” as a child before she started her career at the age of 15.
Though Fisher was best known as Princess Leia, her private life was well publicized, including her past drug use. She used these parts of her life, and others, in her work as a screenwriter and novelist.
She leaves behind a brother, two half-sisters, her husband,  and a daughter, and will forever be remembered for her role in such a pivotal series.

Actress, author, and screenwriter Carrie Fisher has passed away at the age of 60 following a massive heart attack that left her in critical condition.

Fisher was best known for playing Princess Leia in the Stars Wars series. Her role earned her a lifetime of recognition and success. She reprised her role in 2015′s Star Wars: The Force Awakens.

Fisher’s personal has made headlines several times over the past years, highlighting her drugs use and, most recently, her relationship with fellow Star Wars actor Harrison Ford.

However, she used many of her life experiences in her work as a writer, such as in her book, Postcards From The Edge.

Fisher leaves behind a legion of followers and fans, as well as her grieving family.
Please SHARE to remember Carrie Fisher, and if you will miss her greatly.