10:27 AM
shanka
2
Bruce Lee was a phenomenon. When he emerged into stardom in the early 1970′s, the world was blown away. A martial artist at the top of his form, a captivating presence on film and in person, he was humble, intelligent and well spoken, a combination that successfully shattered the one-dimensional stereotype of the Chinese people as portrayed in Hollywood cinema up to that point.


Obsessively driven, he accomplished more in his short 32 years than most do in their entire lifetime, his fame growing to an iconic level after his death in 1973. In 1999 he was named one of Time Magazine’s most influential people of the 20th century, and the awards, honours and accolades he received, both while living and posthumously, remain too numerous to name here.

He was also a philosopher and a poet. Though less well-known, this side of his personality undoubtedly played a large role in the near-mystical qualities many claim he brought to his life and work.
In the creation of Jeet Kune Do, his personal style of martial arts, Lee shed many of the traditional techniques of the fore-running schools in an effort to distill and improve upon the core elements therein, creating a style more in line with the flow of life itself. 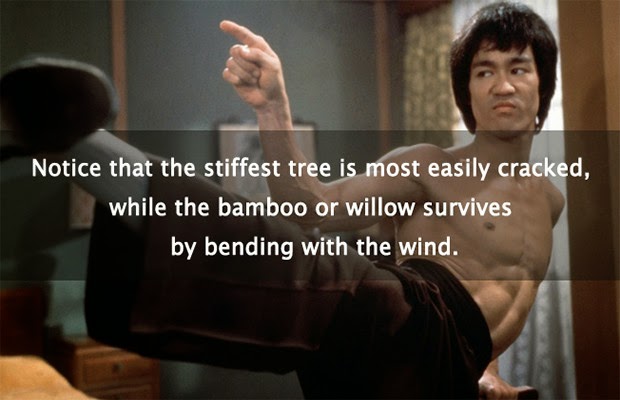 His personal philosophy was no less controversial.

Influenced by much of the wisdom from the east, he nonetheless held no doctrine as the sole arbiter of truth, didn’t possess a belief in a higher power and claimed freedom from limitation as the highest liberation. Beyond doubt, a self-made man.

Here, then, are 25 of his most famous quotes. True to form, they are short, simple and direct in their wisdom.

• Man, the living creature, the creating individual, is always more important than any established style or system.

• What you habitually think largely determines what you will ultimately become.

• Take no thought of who is right or wrong or who is better than. Be not for or against.

• Reality is apparent when one ceases to compare. — There is “what is” only when there is no comparison at all, and to live with what is, is to be peaceful.

• A good teacher protects his pupils from his own influence.

• To know oneself is to study oneself in action with another person.

• Always be yourself, express yourself, have faith in yourself, do not go out and look for a successful personality and duplicate it.

• If you always put limit on everything you do, physical or anything else, it will spread into your work and into your life. There are no limits. There are only plateaus, and you must not stay there, you must go beyond them.

• Do not deny the classical approach, simply as a reaction, or you will have created another pattern and trapped yourself there.

• Real living is living for others.

• Many people dedicate their lives to actualizing a concept of what they should be like, rather than actualizing themselves. This difference between self-actualization and self-image actualization is very important. Most people live only for their image.

• It’s not the daily increase but daily decrease. Hack away at the unessential.

• As love grows older, our hearts mature and our love becomes as coals, deep-burning and unquenchable.

• A good martial artist does not become tense, but ready. Not thinking, yet not dreaming. Ready for whatever may come. When the opponent expands, I contract; and when he contracts, I expand. And when there is an opportunity, “I” do not hit, “it” hits all by itself.

• Things live by moving and gain strength as they go.

• Notice that the stiffest tree is most easily cracked, while the bamboo or willow survives by bending with the wind.

• A wise man can learn more from a foolish question than a fool can learn from a wise answer.

• If you don’t want to slip up tomorrow, speak the truth today.

• A quick temper will make a fool of you soon enough.

• The knowledge and skills you have achieved are meant to be forgotten so you can float comfortably in emptiness, without obstruction.

• If you want to learn to swim jump into the water. On dry land no frame of mind is ever going to help you.

• If there is a God, he is within. You don’t ask God to give you things, you depend on God for your inner theme.