The timing of astral disembodiment in which the spirit leaves the body has been captured by Russian scientist Konstantin Korotkov, who photographed a person at the moment of his death with a bioelectrographic camera. 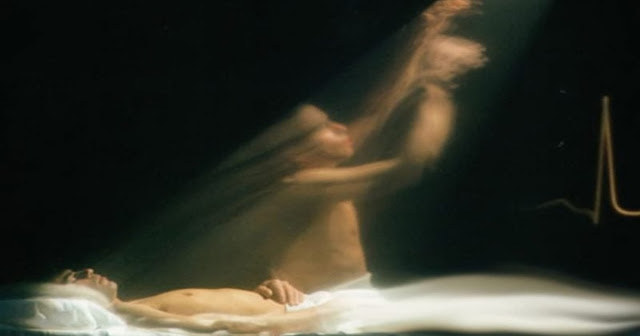 The image taken using the gas discharge visualization method, an advanced technique of Kirlian photography shows in blue the life force of the person leaving the body gradually.
An interesting aspect of  Electrophotonic Imaging (EPI) applications is the research into consciousness processes. Many years of experimentation have made it possible to identify bioelectrographic correlates of altered states of consciousness (ASC) These are particular states, which a person enters during meditation, mental training, religious ecstasy, or when under the influence of drugs, psychedelics or anesthesia. For many years we have been measuring Russian extrasensories, Candamblier priests in Brazil, participants of the Ayahuasca ceremony in Peru,  Chinese Qi-gong masters, and healers in Germany, the USA, and Slovenia. And almost all of these observations we obtain signscharacteristic of ASC. Similar results, using the most diverse devices and methods, were obtained in the laboratories of different countries. This shows that the processes of consciousness are apparent on the physiological processes measured by the EPI method.

According to Korotkov, navel and head are the parties who first lose their life force(which would be the soul) and the groin and the heart are the last areas where the spirit before surfing the phantasmagoria of the infinite.

In other cases according to Korotkov has noted that “the soul” of people who suffer a violent andunexpected death usually manifests a state of confusion in your power settings and return to the body in the days following death. This could be due to a surplus of unused energy.

The EPC method is based on the stimulation of photon and electron emissions from the surface of the object whilst transmitting short electrical pulses. In other words, when the object is placed in an electromagnetic field, it is primarily electrons, and to a certain degree photons, which are ‘extracted’ from the surface of the object. This process is called ‘photo-electron emissions’ and it has been quite well studied with physical electronic methods. The emitted particles accelerate in the electromagnetic field, generating electronic avalanches on the surface of the dielectric (glass). This process is called ‘sliding gas discharge’. The discharge causes glow due to the excitement of molecules in the surrounding gas, and this glow is what is being measured by the EPC method. Therefore, voltage pulses stimulate optoelectronic emission whilst intensifying this emission in the gas discharge, owing to the electric field created.