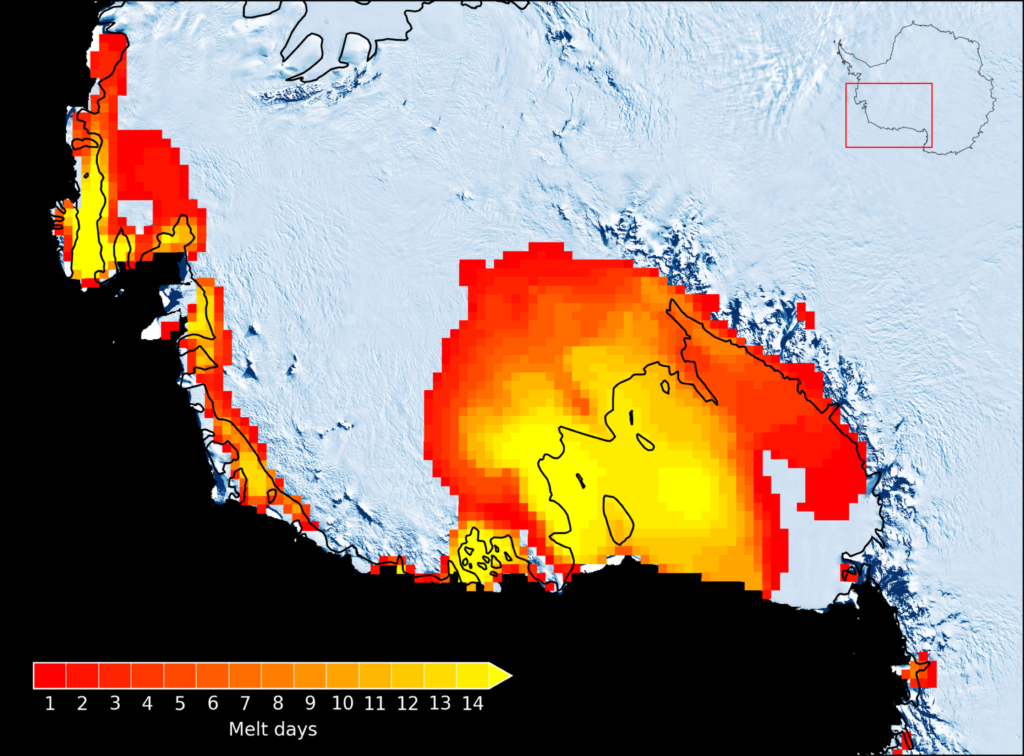 Scientists have just documented a massive melt event on the surface of West Antarctica that could be a harbinger of future events, as the planet continues to get warmer. In the summer of 2016, the surface of the Ross Ice Shelf, the largest floating ice platform on Earth, developed a sheet of meltwater that lasts for up to 15 days. The total area affected was 300,000 square miles—larger than the state of Texas.

“It provides us with a possible glimpse of the future,” said David Bromwich, an Antarctic expert at Ohio State University and one of the study’s authors. “You probably have read these analyses of West Antarctica, many people think it’s slowly disintegrating right now, and it’s mostly thought to be from the warm water eating away at the bottom of critical ice shelves. Well, that’s today. In the future, we could see action at the surface of these ice shelves as well from surface melting. So that makes them potentially much more unstable.”

The researchers were able to observe the melt event from a monitoring station they had set up deep in the heart of West Antarctica that detected a warming of the atmosphere and the presence of clouds containing an unusually large amount of moisture. When Bromwich’s team went to satellites to determine what had happened, the microwave data showed the large melt event. The resulting observations suggest that the Ross Ice Shelf was covered with lakes or pools, but rather, liquid water mixed with the snow.

The melting likely occurred during an El Niño event, which is infamous for bringing warmth to the area. In this particular case, the event brought moist air in from the ocean, causing rainfall atop the Ross Ice Shelf and other parts of West Antarctica.

“The story of melt all over the ice shelf rattled through the science community as it happened,” says Robin Bell, an Antarctic researcher at the Lamont-Doherty Earth Institute at Columbia University. “Who had heard of rain in Antarctica—it is a desert!”

At present, the melt event hasn’t had any major consequences, but it is still worrisome. It fits into a pattern predicted by an influential study of Antarctica published last year, which used climate and ice sheet models to predict the possibility that there could be major ice loss capable of driving as much as 4 feet of sea level rise from Antarctica alone. The study predicted that in the future, the ice shelves may not only melt from below but from above, causing liquid water to filter down and fracture them apart.

“These big melting events that we were studying in this paper is in exactly one of the critical areas that the DeConto and Pollard paper modeled big retreat in the Antarctic ice sheet,” said Bromwich. “So that’s a big significance here. It kind of shows how these big events could take place in the real world, not just the modeled world.”

Another concern is the fact that El Niño events could become more frequent in the future.

“Melting is thought to be death to ice shelves,” Bell added. “This is the first well-documented melt event where we can see how it happened.”