Home » »Unlabelled » Why are Christians Turning to Buddhism ?

Why are Christians Turning to Buddhism ?

A small but growing number Christians in the West are turning to Buddhism for spiritual guidance. Many are reading books about Buddhism, and some are also meditating, participating in Buddhist retreats, and studying under Buddhist teachers. They are drawn to Buddhism’s emphasis on “being present” in the present moment; to its recognition of the interconnectedness of all things; to its emphasis on non-violence; to its appreciation of a world beyond words, and to its provision of practical means — namely meditation — for growing in one’s capacities for wise and compassionate living in daily life. As they learn from Buddhism, they do not abandon Christianity. Their hope is that Buddhism can help them become better Christians. They are Christians influenced by Buddhism. 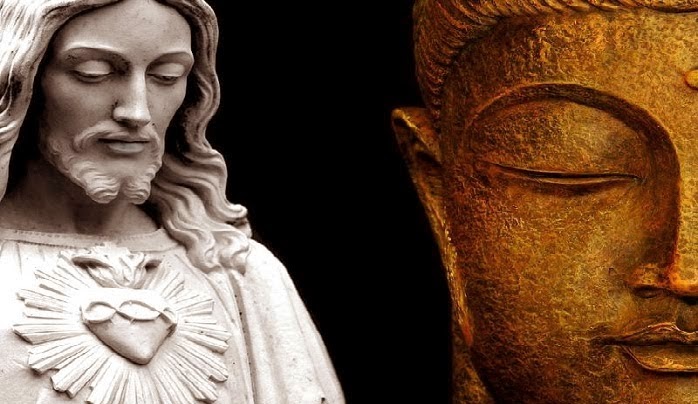 1. Julia is typical of one kind of Christian influenced by Buddhism. She is a hospice worker in New York who, as a Benedictine sister, turns to Buddhism “to become a better listener and to become more patient.” As a student of Zen she has been practicing zazen for twenty years under the inspiration of the Vietnamese Zen teacher, Thich Nhat Hanh, whose book Living Buddha/Living Christ gave her new eyes for Christ, proposing that Jesus himself was “mindful in the present moment.” She practices meditation in order to deepen her own capacities for mindfulness, particularly as it might help her be more effective in her life’s calling. As a hospice worker she feels called to listen to dying people, quietly and without judgment, as a way of extending the healing ministry of Christ. Like many people in consumer society, she sometimes finds herself too hurried and distracted, too caught up in her own concerns, to be present to others in patient and healing ways. She turns to Zen practice because it has helped her become more patient and attentive in her capacities to be available to people in a spirit of compassion.

From Julia’s perspective, “being present” to people in a compassionate way is a spiritual practice in its own right. She calls this attention “practicing the presence of God,” and she believes that this listening participates in a deeper Listening – an all-inclusive Love — whom she calls God, and whom she believes is everywhere at once. She turns to Zen meditation, then, not to escape the world, but to help her drawn closer to the very God whose face she sees in people in need, and to help her become gentler and more attentive in her own capacities for listening. In her words: “I hope that my Zen practice has helped me become a better Christian.”


2. John, too, is a Christian who practices meditation, but for different reasons. He suffers from chronic back pain from a car accident several years ago. He has turned to meditation as a way of coping more creatively with his pain. “The pain doesn’t go away,” he says, but it’s so much worse when I fight it. Meditation has helped me live with the pain, instead of fighting it all the time.” When people see John, they note that he seems a little more at peace, and a little more joyful, than he used to seem. Not that everything is perfect. He has his bad days and his good days. Still, he finds solace in the fact that, even on the bad days, he can “take a deep breath” and feel a little more control in his life.

When John is asked to reflect on the relation between his meditation practice and Christianity, he reminds his questioner that that the very word Spirit is connected to the Hebrew word ruach, which means breathing. John sees physical breathing—the kind that we do each moment of our lives–as a portable icon for a deeper Breathing, divine in nature, which supports us in all circumstances, painful and pleasant, and which allows us to face suffering, our own and that of others, with courage. “Buddhism has helped me find strength in times of pain; it has helped me find God’s Breathing.”


3. Sheila is an advertising agent in Detroit who turns to Buddhism for a different reason. She does not practice meditation and is temperamentally very active and busy. But over the years her busyness has become a compulsion and she now risks losing her husband and children, because she never has time for her family. As she explains: “Almost all of my daily life has been absorbed with selling products, making money, and manipulating other people’s desires. Somewhere in the process I have forgotten what was most important to me: helping others, being with friends and family, and appreciating the simple beauties of life. Buddhism speaks to my deeper side.”

When Sheila reflects on the relationship between Buddhism and Christianity, she thinks about the lifestyle and values of Jesus. She recognizes that Jesus himself had little interest in appearance, affluence, and marketable achievement, and that he was deeply critical of the very idea that “amassing wealth” should be a central organizing principle of life. She doubts that Jesus would approve of the business culture in which she is immersed, in which the accumulation of wealth seems to be the inordinate concern. For her, then, Buddhism invites her to rethink the values by which she lives and to turn to values that are closer to the true teachings of Christ. “I find this simpler way challenging,” she says, “but also hopeful. I hope that Buddhism can help me have the courage to follow Christ more truly.


4. Robert is an unemployed social worker in Texas, who feels unworthy of respect because he does not have a salaried job like so many of his friends. He, too, has been reading books on Buddhism, “Most people identify with their jobs,” he says, “but I don’t have one. Sometimes I feel like a nothing, a nobody. Sometimes I feel like it is only at church, and sometimes not even there, that I count for anything.”

Robert turns to Buddhism as a complement to the kind of support he seeks to find, but sometimes doesn’t find, in Christianity. Buddhism tells him that his real identity—his true self, as Buddhists put it—lies more in the kindness he extends to others, and to himself, than in the making money and amassing wealth. Like Sheila, he sees this as connected with the teachings of Jesus. “Jesus tells me that I am made in the image of God; Buddhism tells me that I possess the Buddha-Nature. I don’t care what name you use, but somehow you need to know that you are more than money and wealth.”


5. Jane is a practicing physicist who works at a laboratory in Maryland who goes to a local Methodist church regularly. For her, a religious orientation must “make sense” intellectually, even as it also appeals to a more affective side of life, as discovered in personal relations, music, and the natural world. But she also finds God in science and in scientific ways of understanding the world. She is troubled that, too often, the
atmosphere of church seems to discourage, rather than encourage, the spirit of enquiry and questioning that are so important in the scientific life. Jane appreciates the fact that, in Buddhism as she understands it, this spirit is encouraged.

This non-dogmatic approach, in which even religious convictions can be subject to revision, inspires her. In her words: “I plan to remain a Christian and stay with my Methodist church, but I want to learn more about Buddhism. I sense that its approach to life can help me see the spiritual dimensions of doubt and inquiry and help me integrate religion and science.


6. Sandra is a Roman Catholic nun in Missouri who leads a retreat center. Twelve months a year she leads retreats for Christians, Catholic and non-Catholic, who wish to recover the more contemplative traditions of their prayer life and enter more deeply into their interior journey with God. At her workshops she offers spiritual guidance and introduces participants to many of the mystics of the Christian tradition: John of the Cross, Teresa of Avila, Meister Eckhart, Hildegard of Bingen. Even as she does this, she herself is on the very journey to God, and she makes this clear to people who come her way.

Sandra turns to Buddhism because she believes that its teaching of no-ego or no-self, when understood experientially and not just intellectually, is itself an essential dimension of the journey to God. She sees this teaching as complementary to, and yet enriching, the teaching of “death and resurrection” that is at the heart of Christian faith. In her words: “Christianity and Buddhism agree that the spiritual pilgrimage involves an absolute letting go, or dropping away, of all that a person knows of self and God. Indeed, this is what happened in Jesus as he lay dying on the cross, and perhaps at many moments leading up to the cross. Only after the dying can new life emerge, in which there is in some sense ‘only God’ and no more ‘me.’ I see the cross as symbolizing this dying of self and resurrecting of new life that must occur within each of us. Buddhism helps me enter into that dying of self.”